While clubbing in an underground nightclub in Valparaiso, the city is hit by a devastating earthquake. Ariel loses a hand but they manage to make it to the surface amidst the chaos. Alarms go off warning of an impending tsunami.

The group manages to get their injured friend on board a mechanical lift going up a hill to a hospital, but it malfunctions halfway up and crashes to the ground, killing Ariel and the other passengers.

Afterwards they’re chased by a gang of crazed rapists who have escaped a nearby jail in the chaos, led by Ramon and Marito. An aftershock hits as they run through a cemetery, and Gringo gets pinned down in the rubble. Pollo and Monica leave to get help.

The gang catches up and find Irina hiding. Ramon rapes her and burns Gringo alive. He then hands Irina over to Marito while they search the place.

Pollo and Monica return along with a fireman they saved from a wreckage, and Pollo uses the man’s axe to kill Marito as he rapes Irina, who is in turn shot in the back by Ramon.

The group flees and asks for shelter at a gated, closed off street, but they’re turned away. Pollo gets shot by a neighbor who mistakes him for a looter. The others leave him hiding behind some trash cans as they go get help. Pollo calls his father, but the beeping from the cell phone gives away his hiding place and the pursuing gang kill him.

The survivors are given shelter at a church; the priest leads them down to the basement and an underground tunnel, but an aftershock hits as they climb down. The fall kills the priest, and Kylie breaks her leg (it is implied that the church collapsed in on the pursuing rapists). The fireman is actually another escaped con from the prison, and he drags Kylie away.

By the time Monica makes it down the tunnel, she finds her sister’s corpse and kills the fireman after a struggle.

Monica eventually finds her way to a beach, where she collapses in exhaustion. She wakes up to find a tsunami wave bearing down on her, as the credits roll. 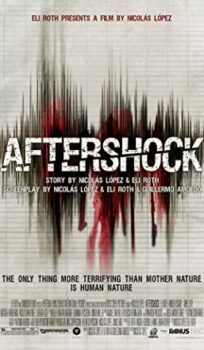