Terry Brogan (Jeff Bridges) is a professional football player who was recently cut from his team because of his various injuries. Jobless and in debt, Terry takes a job from his friend, L.A. nightclub owner Jake Wise (James Woods), to find his girlfriend Jessie Wyler (Rachel Ward) who is somewhere in Mexico. Jessie is also the daughter of the owners of the team that just cut Terry. He tracks her down in Cozumel, where they unexpectedly fall in love. Terry, wanting to keep Jessie away from Jake, tells him by phone that he hasn’t found her. During their affair, Terry tells Jessie about his involvement in a betting scandal which has put him under Jake’s control.

Several weeks later, Jake dispatches the team trainer, and Terry’s friend, Hank Sully (Alex Karras) to look for the two and bring Jessie back to him. Sully finds them and, while fighting Terry, is accidentally killed. Jessie panics and immediately flies home, leaving Terry behind. Now back in L.A, Terry discovers that Jessie has gone back to Jake, and he knows that they had an affair. Jake threatens to blackmail Terry about his gambling on football games unless he does another job for him. Terry’s former agent Steve Kirsch, who now works for the owners of Terry’s former team, has incriminating records about illegal bets made by various members of the local government, who are working with the team’s owners on a land deal, and the team itself. The job involves breaking into his office and taking those records. If those records were known, then the land deal would be dead, and many lives would be ruined, including Jake and Terry’s.

When Terry goes to the office, he finds Steve dead, and no records. Terry hides the body and, knowing he will be set up for Steve’s murder, finds Steve’s secretary, who knows about her boss’s safe. They go back to the office and get the incriminating records. Terry then confronts Jake, Jessie, and her step-father, who is the owner of the team. All he wants is for Jake to leave him alone and for Jessie to come back to him. In return, he will keep the records for himself and not tell anyone about them. Jake tries to kill Terry and take the records from him, but Jake is killed by Jessie with his own gun. The owner agrees to let Terry keep the records, but Jessie cannot go with him.

Six months later, Terry is playing football again, and he sees Jessie at the groundbreaking ceremony for the land deal. Terry tells her step-dad, who is trying to get him to leave, that he cannot keep her from him forever. The last shot of the movie has Jessie looking at Terry lovingly while the Phil Collins song “Against All Odds” is playing in the background. 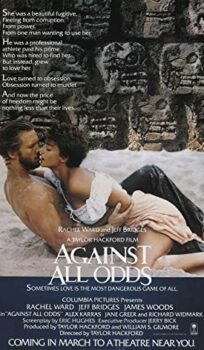