Ted Striker (Robert Hays) is committed to a mental institution for the flight catastrophe that took place in the first movie, Airplane! Elaine (Julie Hagerty) is now his ex-girlfriend and one of the pilots for the new lunar transports that is taking passengers to the moon.  Ted had been its test pilot and knows the lunar transport has a serious defect so he breaks out of the institution and gets on the flight just before takeoff.

The flight’s on-board computer system, ROC, resets their course for the sun.  With the lives of the passenger in danger, the other pilots try to disable ROC but he incapacitates all of them leaving Elaine to pilot the ship. She enlists Ted for help and they rekindle their romance. Scraps the dog intercepts a bomb that a passenger (Sonny Bono) carried on board and they use the bomb to blow up ROC. With the computer down Ted overcomes his drinking problem and fear of failure. He needs to make an emergency landing on the Alpha Beta moon base with the assistance from his old Macho Grande comrade (William Shatner).  They land safely and save all the passengers, but not before crashing into  Alpha Beta. Ted and Elaine get married on the moon. 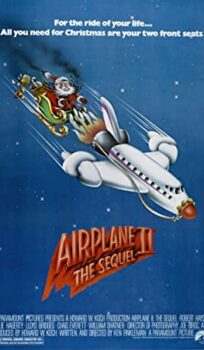