The hijackers knock out the passengers with gas and then begin to loot the cargo holds that are full of expensive paintings and other treasures. The co-pilot, Chambers (Robert Foxworth), is in on the heist. They fly low and off course to avoid radar detection, but they are soon engulfed by a fog bank. Chambers clips an off-shore oil derrick with one of the plane’s wings, and the 747 belly flops in the Bermuda Triangle. During the ocean landing, one of the cargo holds is breached, allowing water to flood part of the plane and the plane sinks.

During the emergency landing, the passengers and crew are rudely woken up. After figuring out what has happened, Capt. Gallagher (Jack Lemmon) and Martin Wallace (Christopher Lee) concoct a plan to get out of the submerged airplane. They do this by sealing themselves in a cargo hold and open the door (the only one that opens inward) using the water pressure from outside. Wallace is killed by the imploding door, but Gallagher makes it out alive with a self-inflating life raft that has a tracer beacon on it.

The Navy tracks the beacon to their location and raises the 747 using balloons and tethers. Most people who survived the crash into the Atlantic Ocean make it out of the plane just before one of the giant balloons pops, sending the plane back to the ocean floor. 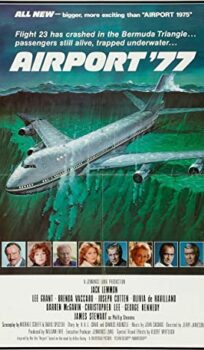