Mel Bakersfeld (Burt Lancaster) is the manager of Lincoln International Airport in Chicago, and he is struggling to keep his airport open despite the city’s worst snowstorm in 25 years.  During the evening, a jumbo jet gets stuck in a snow bank, which blocks one of the two major runways.  To make matters worse, local angry homeowners are protesting the fact that pilots are refusing to obey noise abatement rules during the storm. Fearing a lawsuit, the airport commissioners are ordering Bakersfeld to close the airport, which he is reluctant to do.  In addition to all this, Bakersfeld’s wife is threatening divorce, his pilot brother-in-law Vernon (Dean Martin) is having an affair with a stewardess (Jacqueline Bisset), a 70-year-old woman (Helen Hayes) keeps stowing away on various flights, and a mentally unstable man (Van Heflin) might have a bomb on a plane.

The man with the bomb is on a flight from Chicago to Rome, which is the flight that Vernon and his girlfriend are working, and he is sitting next to the stowaway.  The man’s wife (Maureen Stapleton) goes to the airport and tells Bakersfeld that her husband may have a bomb.  He informs Vernon, but the bomb goes off when he confronts the mentally unstable man.  Vernon’s stewardess girlfriend is severely injured, and there is a huge hole in the plane.  Vernon turns the plane around and is returning to Chicago, where Bakersfeld is pressuring his groundscrew to get the plane unstuck so that the runway can be reopened.  Even though the commissioners will allow the other runway, the one that is causing the homeowners to complain, to be opened due to the emergency, Vernon can’t use it because damage to the plane won’t allow a landing on it.

With only minutes to spare, the stuck jet is cleared from the runway, and Vernon is able to land his plane.  At the end of the movie, we learn that Bakersfeld’s wife will file for divorce because he loves his job more than her, and Vernon goes to the hospital with his girlfriend, who had revealed she is pregnant with his child.  It’s implied that Vernon will leave his wife (Bakersfeld’s sister) and stay with the stewardess.  The stowaway, who had snuck on the plane to Rome, is placed on another flight home, but will continue to stowaway on other flights. 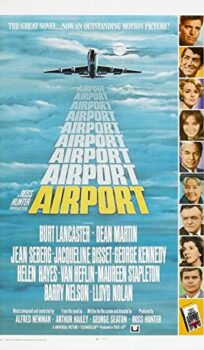