Aladdin and the King of Thieves(1996)

On the Vanishing Isle, Aladdin saves his father Cassim from Sa’luk while Jasmine, Genie, Carpet, Abu & Iago incapacitate the Forty Thieves (who had turned on Cassim and sided with Sa’luk because Sa’luk framed Cassim for an act of betrayal that he was really responsible for). Aladdin & Cassim then venture into the castle on the isle, and they locate the Hand of Midas on a giant levitating gold hand in the main hall.

As the giant turtle the isle rested on is submerging, filling the castle with water, Aladdin gets the Hand and gives it to his father, but soon after Sa’luk shows up. He demands that Cassim surrender the Hand of Midas to him or Aladdin dies. Cassim tosses the Hand to Sa’luk, who unwittingly catches it by its golden part, resulting in him being turned into gold. He falls off the platform and sinks to the castle floor.

Cassim and Aladdin retrieve the Hand and get to the top of the castle, and there Cassim understands just how much pain his obsession with the Hand of Midas has caused, for it almost cost him his true ultimate treasure: Aladdin. He hugs his son and decides to cast the Hand into the sea. When he does, it lands in the Forty Thieves’ boat, turning it into gold and sinking it.

The next scene shows that Aladdin and Jasmine have wed, with Cassim proudly watching his son from the shadows. Iago decides to stick with Cassim, preferring his lifestyle over the lovey-dovey one the newlyweds would surely bring. Aladdin and Jasmine then leave on Carpet for their honeymoon, and wave goodbye to Cassim and Iago as they ride off into the desert. 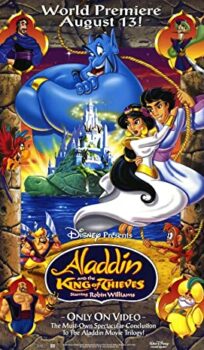