The street rat known as Aladdin (Mena Massoud) meets Princess Jasmine (Naomi Scott) of Agrabah and falls in love with her. He meets the evil sorcerer and vizier to the Sultan, Jafar (Marwan Kenzari), who convinces Aladdin to go into the Cave of Wonders to retrieve a magic lamp for his own gain. Jafar loses the lamp after trying to kill Aladdin, and Aladdin discovers a Genie living in the lamp. Genie (Will Smith) vows to grant Aladdin three wishes since he is Genie’s new master.

Aladdin uses his first wish to become a prince so that Jasmine can marry him. She is not impressed by his attempts to woo her until he acts as himself, and also uses a little magic to help. Jafar tries to kill Aladdin again to get the lamp, but Aladdin ends up exposing Jafar to the Sultan for who he really is. Jafar’s parrot Iago helps him escape the dungeon, and he later steals the lamp from Aladdin and becomes Genie’s new master. He uses his first two wishes to become the new sultan and then to be the most powerful sorcerer in the world. He tries to banish Aladdin, but with help from his friends, he returns to Agrabah and tricks Jafar into wishing himself to be a genie so he can have the same power, but it causes him to get trapped in his own lamp, and he takes Iago with him.

Aladdin uses his last wish to set Genie free, and he goes on to pursue a relationship with Jasmine’s handmaiden Dalia. The Sultan passes on his title to Jasmine, and she chooses to marry Aladdin. They live happily ever after. 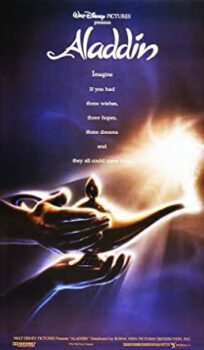