Two months after the fateful accident, and after overcoming deadly blizzards and an avalanche that caused more casualties to the group, Nando (Ethan Hawke) convinces Canessa (Josh Hamilton) and Tintin (John Haymes Newton) to leave the wrecked fuselage and start walking to the West, where, according to a map found earlier in the film, was Chile.  Along the way, Nando practically has to force Canessa to keep going, because Canessa always feels like returning (there’s even a scene where Canessa almost falls off a narrow cliff).

On day 70, they all reach the peak of a mountain, where Nando realizes they may be close to their goal.  They decide to send Tintin back and use his ration of food to gain strength and keep going (it wasn’t made clear whether Tintin made it back to the fuselage or not).  Eventually, the snow trail goes shorter and shorter until they both come down to a green valley.

Finally, after 75 days, the 16 remaining survivors of the accident (the number of deads was 29) are rescued, when two helicopters from the Chilean Air Force come flying upon the accident area and pick them all up, thanks to Nando and Canessa’s valiant effort. 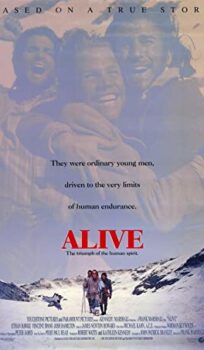