Carface eventually abducts Anne-Marie, and Charlie immediately heads to Carface’s oil tanker casino to save her. Meanwhile, Flo instructs Itchy to take Anne-Marie’s stuffed rabbit to the home of Harold and Kate, the married couple that Anne-Marie interacted with a couple of times during the film, saying that they’ll know what to do when they see it. When asking another dog for directions to the house, he explains why he needs to go there, so the dog rallies up a lot of other dogs in the city to help him. Once Itchy makes it to Harold and Kate’s home and shows them the stuffed rabbit, they recognize it as Anne-Marie’s and follow him and the others to Carface’s oil tanker. While leading them there, the dogs get more people, the police, and an ambulance to follow them as well.

Charlie gets to the oil tanker and finds Anne-Marie, but Carface – having anticipated his arrival – turns his goons loose on him. When one of them bites Charlie’s hindfoot and he howls in pain, his newest friend King Gator hears his cry and comes to his aid. He wrecks the oil tanker, inadvertently starting an oil fire in the process, and then he chases and eats Carface. Charlie tries to save both Anne-Marie and his life watch from the sinking ship, but he finds he can’t do both. He ultimately chooses to get Anne-Marie to safety rather than retrieve his watch, which sinks to the bottom. After sending her out of the ship, he feels his life slipping away, so he makes a desperate dive for the clock. However, water fills its workings and it stops, so he dies again, and because of his initial clock rewinding transgression, he is damned to Hell.

Sometime later, Anne-Marie is sleeping at Harold and Kate’s house, along with Itchy. Charlie’s spirit, accompanied by the Devil, shows up so he can say his goodbyes to her before he begins his eternity in Hell. When the Devil calls for him, the whippet angel Annabelle comes in the form of a blue light, drives the Devil away, and tells Charlie that because he gave his life for Anne-Marie, he has been allowed back into Heaven. Before he goes, Charlie says goodbye to Anne-Marie, and he tells her to take care of Itchy. 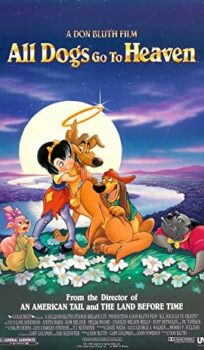