Our Man (Robert Redford), sailing alone near the Sumatra Straits, has his boat damaged by a wayward shipping container. After a series of worsening circumstances (a storm destroys his boat, a shark eats a fish he is trying to catch, he runs out of water in his life raft) he hopes to be found as he drifts into shipping lanes.

He signals to two large container ships with flares but is not seen. When another ship is in sight, he lights a fire in his liferaft, which sets the raft itself on fire and he is left treading water in the ocean. Just as he drifts below the surface, sure to drown, he sees a light from a boat above and he swims to the surface.

The last shot is a hand reaching down to him through the water which he grasps. 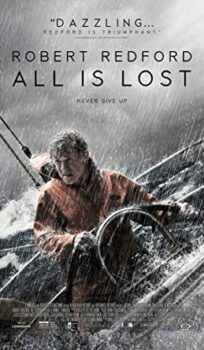