In early 1974, Where the Lilies Bloom was a tender, moving film about children in rural Appalachia who lose both parents unexpectedly in quick succession.  The older sibling struggle to hide the deaths and raise the little ones, so the children can stay together and not be separated into foster homes.  Later the same year, this darkly twisted knock off was released.  For a rushed release, it had a strong cast, with several of them going on to much bigger roles.

Jimmy Wheeler (Stacy Keach) is a freelance photojournalist travelling the back roads of Appalachia.  He meets a small boy struggling to carry home a heavy bag of groceries.  He drives the boy to an isolated home down a deserted dirt road.  He meets a family of 7 children, led by oldest brother Peter (John Savage).  When he tries to leave, his car won’t start and he is trapped there.  He meets Carol, a lady who has been held captive by the children to be their “mother.”

The children’s real mother died in childbirth.  The father got so drunk he fell off the roof and died.  The kids have been living on their own since, but they want to have a father and mother again.  They send the little boy out to lure back strangers to try out as new parents.  The grounds are patrolled by a pack of vicious dogs, and the older kids carry firearms.  Carol is terrified of doing or saying anything that might anger the children.  Carol informs Jimmy that other men came through, but the kids did not like them as a father.  They all disappeared.

Jimmy realizes that Peter killed the other men, but the younger children think Peter let them leave.  Jimmy has the other children watch him leave.  Peter is not willing to have the others see him commit murder, so he lets Jimmy walk off to town.  In a totally incongruous attempted tearjerker finale, Jimmy delivers a monologue about how social service agencies can help the kids.  Peter goes to town with Jimmy to seek assistance (apparently forgetting about possible police interest in the men Peter has killed.) 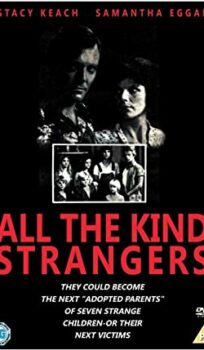