Ampipe, Pennsylvania is an economically depressed town where all of the residents look to their high school football team for moral support.  The football players at Ampipe are all trying to win scholarships so they can get out of town and not have to work at the nearby steel mill.  Their star defensive back is Stefen Djordjevic (Tom Cruise), who wants a scholarship to an engineering school and could care less about playing football.

After Ampipe loses to their undefeated rival, Stefen and his coach (Craig T. Nelson) get into an argument which results in Stefen getting kicked off of the team.  Stefen joins up with a group of drunken fans, who decide to vandalize the coach’s house because they blame him for the loss.  Even though Stefen doesn’t participate in the vandalism, the coach spots him with the others and immediately decides to blackball him from visiting colleges due to his attitude and as revenge for what he did to his house.  With no colleges willing to give him a scholarship, Stefen sees his dream of becoming an engineer going down the drain.  Meanwhile, the coach is looking to get hired by a college so he can get out of Ampipe as well.

With no scholarships and no chance of going to college, Stefen reluctantly takes a job at the mill.  One night after work, Stefen spots his former coach and rips into him.  He claims that just because he’s a high school football coach doesn’t give him the right to play God and take away his dream.  The next day, the coach tracks down Stefen at the mill.  He apologizes for his actions and offers him a full scholarship at Cal Poly, the college that just hired him.  The movie ends with Stefen signing the letter of intent and accepting the scholarship. 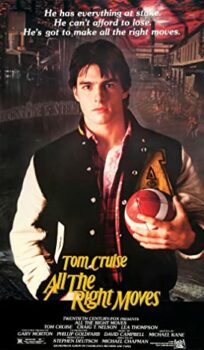