The third film in the Divergent series.

POOPER
Evelyn releases the gas, not realizing that it will wipe away the memories of everyone in Chicago, not just the Allegiant.  Upon learning her mistake, she tries to stop it, only to be shot by Peter.  Peter then sees the gas enter the vault, and now knowing he was double-crossed, runs away, which allows Tris, Four, and the others to stop the gas.  Tris has to destroy the dispersion hub to stop the gas from being released, and she does it after evading David’s attacks.  Tris then records a video and plays it throughout the city, telling everyone about the Bureau and how they as a whole will stop their oppressors.  The invisible wall separating Chicago from the Bureau is blown up, revealing its existence to everyone.

LONG VERSION
Picking up shortly after the events of Insurgent, Evelyn (Naomi Watts), the Factionless leader, has taken over control of Chicago.  The gates, which were opened when the message from the box was read, are ordered to be closed again until it can be learned what is beyond them.  Evelyn has also ordered the factions be dissolved, as well as trials for those involved in the coup from Divergent.  Since Jeanine is dead, Max (Mekhi Phifer), the former Dauntless leader, is the first to be tried.  Jack (Daniel Dae Kim), the former head of Candor, is holding the trial, and Max is quickly found guilty.  He is ordered by Evelyn to be executed immediately, much to the dismay of Johanna (Octavia Spencer), the former head of Amity, and the members of her faction.  They walk out of the courtroom and Edgar, a member of the Factionless, kills Max.  Tris (Shailene Woodley) and Four (Theo James) are watching the trials and see that her twin brother Caleb is next to be tried.  They successfully break him out of jail, and the three of them, along with their friends Christina (Zoe Kravitz), Tori (Maggie Q), and Peter (Miles Teller) attempt to scale the wall to flee Chicago.  They are being chased by Edgar and other Factionless, and as Tris, Four, and the others climb the wall, Edgar shoots and kills Tori.  The rest make it over the wall and begin to run across the land on the other side of the fence.

The group quickly see the land is a barren and toxic wasteland.  They are also still being pursued by Edgar.  As the chase continues, an invisible wall opens up, revealing several soldiers.  They blow up Edgar’s vehicle, and the group are taken by the soldiers to a facility called the Bureau of Genetic Welfare.  After taking a decontaminating shower and having barcodes printed onto their skin, the group is shown a video of what happened to the world.  200 years ago, a miracle drug was created in hopes of fixing damaged genes, what was believed to be causing all the troubles of the world.  Instead of fixing things, it made them worse, leading to nuclear war, which destroyed most of the planet.  In hopes that humanity would self-reset those genes, scientists created the Bureau and set up cities around the world as experiments, which Chicago being one of them.  The faction system was set up in hopes that would accelerate the process.  After the video ends, the group are given jobs within the Bureau.  Four and Christina are to join the security team that patrols the wasteland (it’s actually called the Fringe), Caleb and Peter are to join the surveillance team that monitors all of the activity inside Chicago, and Tris is sent to the top floor to meet with the head of the Bureau.

David (Jeff Daniels), the head of the Bureau, tells Tris that she is the first 100% Divergent to come out of the city, and it shows that their experiment can succeed.  David has deemed Tris “pure” and everyone else, including Caleb and fellow Divergent Four, as “damaged”.  He then gives Tris a device that will allow her to see the memories of her late mother Natalie (Ashley Judd).  As a young girl, Natalie was rescued by the Bureau from the Fringe and was so moved by the idea of the experiment that she voluntarily chose to go live in Chicago.  After seeing this, Tris agrees to go along with the experiment.  David then tells Tris that, due to the surveillance, he is aware of everything that has happened in Chicago, but needs the permission of the Council of Leaders to intervene.  Meanwhile, Caleb, through the surveillance, sees that Johanna and the former Amity have abandoned their peaceful ways and, now calling themselves Allegiant, are planning on forcefully removing Evelyn from power.  Caleb also sees Edgar (who survived his attack) shoot an Allegiant, triggering a shootout between them and the former Factionless.  Also at this time, Four and Christina have joined the soldiers on a mission into the Fringe to rescue those still living there.  However, Four quickly sees all they are doing is kidnapping the children living there and killing their parents, and Christina notices that the decontaminating gas the kids are given also makes them lose their memories of their parents and everything else about the Fringe.

That night, the group gets together to tell Tris what is happening.  Four says he wants to return to Chicago to appeal to his mother to stop the bloodshed, and he wants Tris to come with.  However, she decides to stay with David, who is planning to take her to the next meeting of the Council.  Four does find out that his request to return was approved by David, and he will leave the next day.  In the morning, while Tris and David are traveling to the Council Headquarters, Four boards a transport vehicle to take him to the invisible wall that separates the Bureau from Chicago.  However, Matthew, one of Four’s teammates, whispers to him that he is not going to Chicago, and that he will be dropped into the Fringe and killed under David’s order.  Four then fights off the entire security team, which causes the transport to crash, killing everyone except Four and Matthew.  Matthew then gives Four his badge that will allow him to open the wall and return to Chicago.  At the Council meeting, Tris pleads to the members to continue with the experiment, but discontinue with the pure vs damaged split.  She also asks for their permission to help stop the war brewing inside the city, but they tell her that David has always had their permission to intervene.  After they return to the Bureau, and now knowing that David has been lying to her, she, along with Caleb and Christina, steal David’s personal vehicle and fly back to Chicago, evading the security team along the way.

Back at the Bureau, David meets with Peter, the only one who chose not to return, and orders him to go to Chicago to convince Evelyn to deploy a hidden stockpile of the gas because that is the only way to stop the Allegiant.  Peter is able to get to Chicago before Tris and the others, and gives Evelyn a gift from the Bureau, a sample of the gas.  She uses it on her ex-husband (and Four’s father) Marcus.  She watches as she sees his mind literally deteriorate and leave him with no memory of who Evelyn is or why he is there.  She agrees to use the gas, but only as a last resort.  Edgar and the Factionless then arrive with a captured Four, who tells her not to trust her new friend from beyond the wall, but she ignores him.  As the fighting on the streets between the Allegiant and Factionless continues, Evelyn decides to use the gas.  Peter tells her the vault that contains the gas will protect them from it’s effects, and she deploys it.  Just then, Tris, Caleb, and Christina arrive, along with a rescued Four, and they tell her what will really happen.  The gas will wipe the memories of everyone, not just the Allegiant, and Four tells his mother that he will no longer have any memories of her.  Evelyn, realizing her mistake, tries to stop the gas from being vented out into the city, but Peter shoots her and continues to let the gas escape.

As the gas begins to circulate throughout Chicago, it suddenly starts to appear in the vault.  Peter, now knowing he was double-crossed, opens the vault door and runs away, allowing Tris and the others to stop the gas.  They realize the only way to stop it is to destroy the dispersion hub, and Tris runs to the main power room to destroy it.  But David, watching from the surveillance room back at the Bureau, is trying to stop her.  Tris is able to fight off his attacks and successfully destroys the hub, halting the gas dispersion.  Later that day, Tris, Four, Caleb, Christina, and a wounded Evelyn are on the roof of the Erudite building watching a message recorded by Tris be played throughout the city.  She tells everyone all about the Bureau and how the city as a whole, not divided by factions and not as pure or damaged, will stop their oppressors.  The movie ends with David’s vehicle, filled with explosives, blowing up the invisible wall, showing everyone in Chicago the outline of the Bureau building.  As the group is looking at the building, David can be seen watching them as he plans his next move. 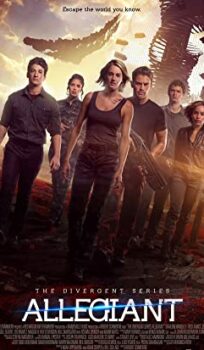