As they are riding on a train back to Jasper National Park, Kate and Humphrey share a howl together under a full moon as another sign of their growing love for each other, and under that very same moon back in Jasper, Kate’s betrothed, Garth, and her sister Lilly – who also now share a mutual attraction – share a howl as well after Lilly teaches Garth how to howl properly (his howl was originally quite dreadful). However, after Garth and Lilly finish, Garth spots his father Tony and the rest of the Eastern wolf pack emerging from the woods since this full moon was the deadline for Garth to marry Kate lest the Eastern wolves take the Western wolf pack’s land by force. Garth orders Lilly to go away after she sees them, so she runs and soon meets up with her father, Winston, and the rest of the Western wolves. After warning them that the Eastern wolves are coming, they head out to face them.

Humphrey wakes Kate when he sees that the train has entered Jasper, and they begin to talk to each other about how they’ve enjoyed their time together. However, before Humphrey can confess his feelings to Kate, she spots the packs on the verge of waging war, so she quickly leaps off the train with him following behind and gets everyone’s attention. She explains why she and Humphrey were missing, and after Tony reminds her of her marriage to Garth, she says that they will proceed with the marriage as planned. Humphrey and Lilly are disappointed with this news, and Kate and Garth each show that they aren’t excited about this, either.

Just before the wedding the next day, Marcel and Paddy – who helped Kate and Humphrey get home – pay Kate a visit so they could see that she made it back to her pack safely and also tell her of how they learned that she will be tying the knot that day, and then Humphrey appears when she asks how they found that out. After Marcel and Paddy leave them to talk alone, Humphrey tells Kate that he has decided to leave the pack and go wherever the next train takes him, and though Kate isn’t all that thrilled with his decision, she makes no effort to stop him.

Before she and Garth can complete the ceremony, Kate stops herself and tells everyone that she can’t marry Garth because she has fallen in love with an Omega wolf. After Tony points out that it violates pack law for Alpha wolves to mate with Omegas, Garth informs him that he, too, has fallen for an Omega as well and goes to Lilly. Tony initiates a battle between the packs over this, but it ends quickly when Kate points out a stampede of caribou heading their way. All of the wolves make it to safety except for Winston and Tony, and as Kate and the other Alphas are chasing the stampede looking for a way to save them, Humphrey suddenly appears, having changed his mind. Using half of a hollow log like a sled, he and Kate slide down the hill they are on and fly off a cliff, landing in front of the stampede and breaking their sled into two pieces. Winston and Tony take cover behind them, and Kate and Humphrey crawl towards them to join them, but Kate gets struck hard by one of the caribous. Humphrey shields her with his own body while Winston and Tony scare the caribous away from them until they have all left.

Thinking that Kate has been killed, Humphrey tells her he loves her and then starts howling in mourning, which all of the wolves join in on. Thankfully, everyone assumed incorrectly when Kate opens her eyes, showing that she was just unconscious. Kate and Humphrey whisper in each other’s ears that they love each other and then rub noses, and Winston and Tony decide to break with tradition and accept this pairing, as well as the pairing of Garth and Lilly, prompting Lilly to pounce on Garth and rub noses with him as well.

The movie ends with both wolf packs, as well as Marcel and Paddy, howling together at the next Moonlight Howl, and Kate and Humphrey perform a duet to celebrate their union. 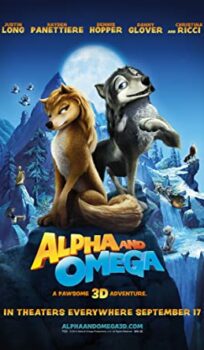