SHORT VERSION:
After losing the chipmunks to Ian, the greedy record executive, Dave rescues the over-worked chipmunks and they all live happily ever after. That is of course, until Alvin frustrates Dave so much that Dave lets out a final…”ALVIN!!!”

LONG VERSION:
The movie opens with Simon, Alvin, and Theodore singing and storing nuts in their tree for the winter. The nuts all fall out when Alvin looses his temper, and the tree begins to shake. The camera pans out, and we see their tree being cut down for a Christmas Tree company.

The scene changes and we see Dave sleeping after a night of writing songs. Dave rushes out of his house because he is late for a meeting, and he runs into his old girl friend. Dave invites her to dinner and then runs to his meeting at Jet Records to sell his songs. He arrives at Jet and meets his “friend” Ian, the executive of the record company. Dave walks down a hall where women offer him muffins drinks, and omelettes. Ian tells Dave that his music sinks and never to write music again. Dave leave the office and steals the basket of muffins.

He goes to the main lobby and we see the chipmunks again. They are still in their tree, and they try to leave the crowded dangerous lobby. They jump into the basket of muffins Dave is carrying.

Dave arrives home, throws away the muffins, and tosses his music stuff outside. He sits down to watch TV and hears a strange noise coming from the kitchen. He searches it and catches Alvin; who then gets away and drops a jar on Dave’s head. He is knocked unconscious and when he wakes up he hears the chipmunks talking. He thinks he is crazy and throws them outside. He hears singing coming from outside, and he realizes it’s the chipmunks. He agrees to let them stay if they sing his songs. He gets back his music equipment from outside, that is now wet from the rain. Simon makes paper planes from Dave sheet music, so he has to come up with new songs.

They all go to bed, and Dave hears the chipmunks snoring like their famous Christmas song. He starts singing and then goes to write the song. In the morning they sing the song, and he takes them to see Ian. They get stage fright, and Ian thinks Dave is crazy.

Dave gets angry and forces the chipmunks to go home while he goes to his marketing job. He is making an advertisement for energy bars, and he gets fired when his boss sees that the chipmunks colored on his presentation.

Dave gets a message from his ex about dinner. While they are eating Alvin tries to make things more romantic. Dave’s ex gets angry and when Dave tells her about the chipmunks she thinks he’s crazy.

The chipmunks feel guilty and that night they leave to sing for Ian. While they are gone, Dave puts together a box with a note explaining why he wants to get rid of him. He changes his mind and crumples up the note but misses when he tries to throw it away.

The next day they all go food shopping. While putting back all the pop up waffles the chipmunks put in the buggie, Dave hears the Christmas song come over the radio. Ian calls him and tells him to write another song for them to sing at a party.

At the party, the chipmunks sing their witch doctor song. Dave’s girlfriend is there and they all talk about Dave not wanting a family. Ian talks to Dave and he tries to convince Dave to market the chipmunks. Dave refuses, so Ian tells the chipmunks that Dave calls them rats and hates them.

The chipmunks are hurt and a couple of days later they go to live with Ian. They become tired and ill from over working, and Dave comes to the rescue at their concert. Ian puts the chipmunks in a cat carrier, but they get out and meet Dave in his car.

They all go home and live happily ever after together. 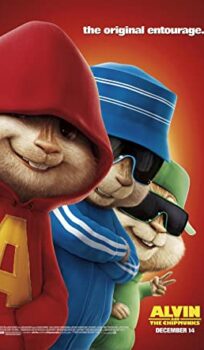