After a couple of instances where Pete (Richard Dreyfuss) interferes with Dorinda’s (Holly Hunter) and Ted’s (Brad Johnson) burgeoning romance through their thoughts, he is brought back to the burnt forest that he arrived in right after he died and finds himself meeting Hap (Audrey Hepburn) again. Hap reminds him that his life is over, and anything he does for himself – such as his interference – is a waste of spirit. Pete replies that he remembers her telling him that, but then says that he feels like she didn’t give him the whole story behind his mission. He asks her what she wants from him, because he hurts so much inside and she never told him that he would feel like this, or that he would see Dorinda. Hap informs Pete that he was not only sent back to inspire Ted, but also to settle his business with Dorinda and say goodbye to her, and until he does that, she won’t be free – and neither will he.

One night, a bunch of smokejumpers get overwhelmed by a forest fire on the south side of Dome Mountain, and their planned escape route gets cut off. The squad leader radios Al (John Goodman) to let him know of the peril he and his men are in, and he adds that the only escape route they now have is down a gully to the southwest, where they are trying to get to the Kootenai River. Al tells Pete to get on the radio to the helibase and have the choppers turned up and standing by, but Pete influences Ted to go out in a plane, fly into the gully, and dump slurry as he goes so the smokejumpers can have a clear path to the river, since they are closer and have aircraft that can reach the scene a lot faster. When Al finds out what Ted is planning to do, he is against it because he considers it so risky that not even Pete would have been able to pull it off, and he soon telephones Dorinda and tells her of Ted’s impending flight and that she must come down to the airfield. She hurries over, and after looking into the operations shack through the window and seeing Ted go over his plan with Al and some others, she decides that she can’t lose him like how she lost Pete, so she steals his plane so she can do the job herself.

Having sensed her intentions before she stepped into that plane, Pete joins her in it, and through her thoughts, he orders her to turn around because this is Ted’s mission and she is not good enough to get the job done. Al yells over the radio for her to come back, but she takes the headphones off. After accepting that she is doing this regardless of how anyone feels, Pete instructs her to make a path for the smokejumpers to the river. However, when she makes her first dump of slurry, it doesn’t put out the flames because she is too high up. Pete tells her to turn around and try again at a lower altitude, and despite the danger associated with riding straight into the fire, she completes the dump successfully, but the plane sustains damage as she goes.

After pulling out of the blaze, Dorinda radios the base to let them know that she is fine and the smokejumpers are free and clear, then shuts the radio off. As she flies along, Pete tells her that she will have a wonderful life and will have all of the great things that go with it, and he finally tells her that he loves her and that he should have told her that, plain and simple, a long time ago. He says that he knows now that the love we hold back is the only pain that follows us to the afterlife, and the memory of that love should not make you unhappy for the rest of your life. Though Dorinda hears these words as her own thoughts, she cries. He then asks her if she can hear him, then requests that she brush the hair away from her face if she can so he can see her eyes and say goodbye. She brushes her hair away, but then notices that the plane’s oil pressure is dropping, thanks to the damage. Pete instructs her to try to make an emergency landing on a nearby lake, and though she manages to land in it, the plane immediately sinks to the bottom. She can’t get the door open and becomes submerged, but then Pete appears before her eyes (likely because she is in a near-death situation) and extends his hand out to her. She takes it, and he brings her up to the surface, where he disappears from her sight.

Dorinda walks all the way back to the airfield, and a rescue team drives down the runway towards her. Pete whispers encouragingly for her to go to them and thus towards the rest of her life, and says that he is releasing her heart so Ted can replace him. After Ted and Al pull up first, Dorinda walks up to Ted and lovingly hugs him, and Pete watches them as they leave with Al and the rescue team and proudly remarks, “That’s my girl….and that’s my boy”. He then turns and walks down the runway in the opposite direction, undoubtedly heading towards Heaven. 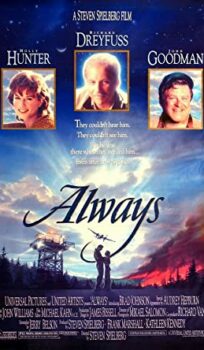