In Los Angeles, brothers Will and Danny Sharp pull off a bank robbery after Will tells Danny he needs money for his wife’s cancer surgery. Things go awry when they take a cop, Zach, hostage and shoot him. When a paramedic named Cam tends to him, Will and Danny hijack the ambulance with her and Zach inside, leading police on a wild chase across the city for them.

After several incidents of outrunning the police, as well as having to keep Zach from dying, the guys lead the police to a location where other gangsters and criminals retaliate with gunfire and explosives. After delivering the cut of money to their gangster employer, Papi, he demands that Will and Danny leave Cam and Zach with him after his son gets killed by another cop. Will and Danny kill Papi and his guys, but Cam accidentally shoots Will in the chaos. Once they are surrounded by cops, Danny attempts to kill Cam, but Will shoots and kills him first.

Will is taken into custody at the hospital, but Zach tells other officers that Will saved his life. Cam also slips some of the heist money to Will’s wife. 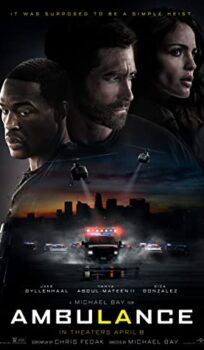