Amelia Earhart (Hilary Swank) is an aviatrix who sets many records including being the first woman to pilot a solo Transatlantic flight.  She marries publisher George Putnam (Richard Gere) and loves him but not wanting to be tied down, she has a brief affair with fellow aviation enthusiast and businessman, Gene Vidal (Ewan McGregor).

Amelia wants to be the first female to pilot a global flight and with the help of her husband and many financial sponsors, the project is green lighted.  Her first attempt at the global mission fails when a faulty landing gear causes the plane to crash upon takeoff.  She and navigation specialist Fred Noonan are more successful on their second attempt and are able to take off successfully.

Thirty days later, Amelia and Fred are making their way back home after successfully circumnavigating the globe.  After leaving Papua New Guinea, the two have one shot to refuel their plane on the tiny Howland Island.  If they miss the island, they will not have a enough fuel to complete the Pacific crossing.  On Howland Island, the Navy is standing by to guide Amelia’s plane in but communication malfunctions lead to Amelia never receiving the Navy’s transmissions.  After several failed attempts to find the island and already dangerously low on fuel, it is assumed that the plane goes down in the ocean.  A footnote after the movies says that no evidence was ever found of Amelia, Fred or their plane after an extensive Pacific Ocean search.  However, Amelia Earhart will forever be known as a pioneer for woman in aviation. 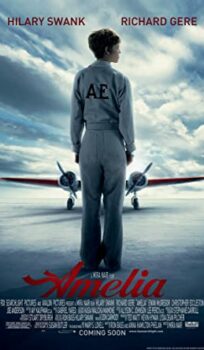