Michelle (Alyson Hannigan) has readied Jim (Jason Biggs) for an intimate encounter with Nadia (Shannon Elizabeth), but Jim comes to realize that Michelle is really the one he wants to be with. He tells this to Nadia before he leaves her and goes to Tall Oaks Band Camp, where he interrupts a concert there that Michelle is in, and he runs up to her on stage and they kiss. They sleep together back at the beach house later on, and officially become a couple.

At the end-of-summer party at said beach house, Nadia ends up sleeping with Chuck Sherman (Chris Owen) after his “Sherminator” shtick turns her on. Stifler (Seann William Scott) finds out from Danielle (Denise Faye) and Amber (Lisa Arturo), women whom he thought were lesbian lovers, were not really lesbians at all, and he ends up sleeping with both of them. Heather (Mena Suvari) makes a surprise early return from Madrid, much to the delight of Oz (Chris Klein), and they sleep together.

Kevin (Thomas Ian Nicholas) put his old feelings for Vicky (Tara Reid) behind him, telling her he’d rather have her as a friend than not have her in his life at all.

When the guys are leaving the beach house the next day, Stifler’s mom (Jennifer Coolidge) finally arrives, and we learn her name is Jeannine before she and Finch (Eddie Kaye Thomas) go somewhere and have sex in her car. 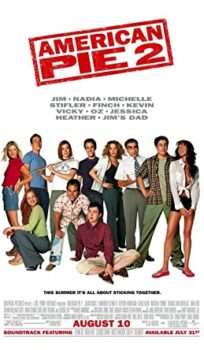