SHORT VERSION:
Erik, Cooze, and Bobby complete the Beta Delta Xi fraternity’s pledge list and get sworn into the frat, and later, the Betas triumph over the rival Epsilon Sigma Kappa (or Geek) fraternity in the Greek Olympiad, winning four events to three. Because of some stakes set before the competition, the Geek fraternity is forced to give up their charter and give the Betas their house.

At a celebratory toga party that night, Erik and Ashley – who have become a couple – have sex in a room while Erik lets a movie roll, telling her that he plans to suggest “sex in a movie theater” as a new task for the pledge list. Cooze finds out that his new love Denise doesn’t have a penis like he feared, due to her being hesitant about doing any kind of physical sex act with him, and they go to a room of their own to get intimate. When Cooze performs cunnilingus on her, he discovers first-hand that her hesitation stems from the fact that she ejaculates during sex acts, but he assures her that he is perfectly fine with that, and they consummate their relationship.

Later on, the Geek fraternity’s leader Edgar (Tyrone Savage) comes to the house, since the trio had left a Beta calling card at the scene of the theft, and he tells Dwight that this is the last straw. He smashes open the Beta’s trophy case and takes the Golden Hammer of the Greek Olympiad, then challenges the Betas on behalf of his fraternity to said Olympiad, despite it having been outlawed years ago for the extreme degree of perversion that occurs during it. He also adds a stake where the losing fraternity will have to give up their charter and surrender their house to the winning fraternity. Dwight accepts on behalf of the Betas, and he persuades Noah Levenstein (Eugene Levy) to come back to officiate the Olympiad, since he was the last captain to win it before the ban was put in place.

Dwight then receives an anonymous letter telling him to come alone to center court at the arena at 10 p.m. that night if he wants to know what Edgar’s weakness is. He goes there to find his old rival Rock (Jordan Prentice) waiting for him. Rock tells him that he is out for revenge on Edgar, and gives him a backstory on why: Edgar tried to pledge the Lambda Pi Gamma fraternity three years ago, and he had to undergo a tradition where pledges were put in an enclosed room in the basement of the frat house with a sheep and given a condom, and they were told to have sex with it and they couldn’t come out until the condom was used. Edgar was the first to actually go through with it, and he actually liked it a lot, much to Rock’s disgust since he and his frat never really expected anyone to actually diddle the sheep. The higher-ups at the university got wind of this occurrence and Rock and the other Lambdas were punished for it by getting booted off the campus. Dwight says he is unclear about how this information is going to help him, but Rock tells him that he’ll figure it out, and then he leaves.

At the Olympiad, the Betas and Geeks win three events each, forcing a sudden death event that involves Dwight and Edgar receiving lap dances from various beautiful ladies, with the loser being the one who ejaculates first. Edgar eventually tries to get Dwight to fail by subjecting him to a first-rate stripper he brought in from Las Vegas, but Dwight – having already figured out the meaning behind Rock’s story – summons for Bobby’s girlfriend Margie (Christine Barger), and she comes in dressed in a sheep costume and dances for Edgar. Edgar can’t contain his excitement and ejaculates, giving the Betas total victory.

At a celebratory toga party that night, Cooze’s love interest Denise (Sarah Power) puts his hand on her thigh and has him feel her up all the way into her crotch area, and he happily discovers that his fears about her having a penis are unfounded. When they go somewhere private and he performs cunnilingus on her, he discovers first-hand that the reason why she has been so hesitant about getting physical with him is because she ejaculates during sex acts. He lets her know that he considers it very sexy, and they finally consummate their relationship. Meanwhile, Erik takes his new girlfriend Ashley (Meghan Heffern) into a private room and tells her that he has come up with a new task for the pledge list: Sex in a movie theater. He then plays a movie on a projector and starts getting busy with Ashley.

During the credits, Wesley (Jonathan Keltz) wakes up the next morning from another alcohol-induced blackout and discovers that he had sex with the female bodybuilder the Geek frat brought in for one of the Olympiad events, and she comes at him for round two. In a post-credits scene, Edgar is shown sitting at the Silver Dollar Room, and he gives the headpiece to the sheep costume to one of the strippers and tells her to wear it for her next dance. 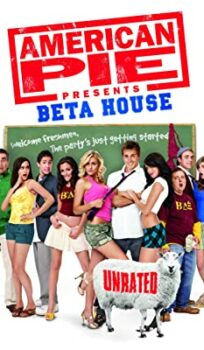