SHORT VERSION:
Erik and his friends Ryan and Cooze have a blast at the Naked Mile event, but after the run, Erik gets a kiss from Brandy, a sorority girl who took a shine to him. Tracy sees this on TV and becomes upset, and after telling her friends what she saw, they take her to a party at Allison’s house to get her mind off of it. They then encourage her to hook back up with her ex Trent, believing that Erik has already used his weekend pass with Brandy and thus she needs to get on equal footing with him by sleeping with Trent.

At Dwight’s after-party at the Beta fraternity house, Brandy takes Erik to a private room to have sex with him. He soon stops her and says that he can’t because he loves Tracy, and she understands. He heads back to town and tracks down Tracy to the party, and learns that she is now in an upstairs bedroom with Trent. He goes up there and talks to her outside the door, saying that he never used his pass and that he loves her. Trent opens the door, and we see that he has another woman in there, and Tracy appears behind Erik and says that she couldn’t do it, either. They kiss, and then they go somewhere private and lose their virginity to each other.

The next morning, Erik picks up his friends and tells them about how he slept with Tracy, and Ryan proudly calls him “Stifler”, but he asks him to call him Erik. They all then return home.

LONG VERSION:
Erik (John White), Ryan (Ross Thomas), and Cooze (Jake Siegel) run in the Naked Mile and have a blast, and Erik locks lips with Brandy (Candace Kroslak), a sorority girl who took a shine to him. However, a news crew on hand for the event puts their kiss on camera, and Tracy (Jessy Schram) is watching the event at home, so she sees this and becomes upset. She vents to her friends Brooke (Jordan Madley) and Natalie (Melanie Merkosky) about it and about how foolish she feels for giving Erik a guilt-free weekend pass, so they decide to take her to a party at Allison’s house to get her mind off of him. While they’re there, Brooke comes to believe that Erik has done the dirty deed already, so she tells Tracy that she needs to sleep with someone to get back on equal footing with him. Natalie then spots Tracy’s old boyfriend Trent (Jon Cor), and Tracy soon starts talking to him and explains how she and Erik are on a guilt-free pass, and he eventually suggests that they go upstairs, which she agrees to do….

Meanwhile, at the after-party at the Beta Delta Xi fraternity house, Ryan sleeps with Alexis (Angel Lewis), and Cooze with Jill (Jaclyn A. Smith). Dwight (Steve Talley) sees Vicki (Mika Winkler) – the girlfriend of his rival Rock (Jordan Prentice) – among the partiers, and sparks fly between them to the point where they end up sleeping together as well. Brandy takes Erik somewhere private, and as she starts to put the moves on him, she confesses that she is attracted to virgins and Erik is not the first one she has ever slept with. Just as things are getting hot between them, Erik stops her and tells her that he just can’t do it because he loves Tracy, and she understands. He then takes off back to East Great Falls to see Tracy.

His car runs out of gas ten miles outside of town, and as he wonders what to do next, a white horse appears out of nowhere, so he rides it to Tracy’s house. Tracy’s father tells him that she has gone to a party with her friends, so Erik checks around the neighborhood to find any parties going on and finds Allison’s party. He asks Brooke and Natalie where Tracy is, and they reply that Tracy is using her guilt-free pass with Trent right now. He tracks her down to a locked upstairs room, and he tells her through the door that he didn’t use his guilt-free pass and came here to look for her, and he considers her more important than sex and that he loves her. Trent opens the door, but Erik discovers that he is with another woman. Tracy then appears behind him and says that she couldn’t do it either and she loves him, too. They kiss, and then they go into a private room and lose their virginity to each other.

The next morning, Erik returns to the Beta house to pick up Ryan and Cooze, and as they chat about their sexual experiences, Erik tells them about how he returned to their hometown and slept with Tracy. Ryan commends him for it and calls him “Stifler,” but he replies that he wants to be called Erik. They then drive back home.

Later that day, at the Lambda Pi Gamma house, Rock gets a blank DVD in the mail labeled “Payback’s a Bitch”, so he plays it and finds that Dwight had recorded himself screwing Vicki, as revenge for Rock and the other Lambdas earlier beating him up and almost making him miss the Naked Mile. The credits show that Dwight and Vicki became a couple, and we see photos of them travelling the world. 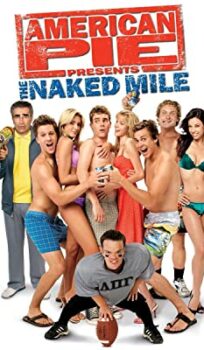