Chuck Sherman (Chris Owen) lied about having sex with Sarah (Eden Reigel), and she lets the whole graduating class know of this at the prom, along with some other embarrassing things about him. Jim (Jason Biggs), Kevin (Thomas Ian Nicholas), Oz (Chris Klein), and Finch (Eddie Kaye Thomas) fulfill their pact at Stifler’s (Seann William Scott) post-prom party. Jim sleeps with band geek Michelle (Alyson Hannigan), who it turns out actually saw his disastrous webcam broadcast with Nadia (Shannon Elizabeth), and she surprises Jim with her sexual prowess. He wakes up the next morning to find her gone. Kevin sleeps with his girlfriend Vicky (Tara Reid), but they break up the next morning on the grounds of them being too far apart in college to try and keep the relationship going, with him going to Ann Arbor and her going to Ithaca. Oz sleeps with Glee Club member Heather (Mena Suvari), but doesn’t actually tell his friends that he did, showing his reformed conduct from an insensitive jock to a more mature person. However, he does tell them that they are in a relationship now. Finch sleeps with Stifler’s mom (Jennifer Coolidge), getting revenge on Stifler in the process for screwing up his chances of getting a prom date.

The last scene shows Jim dancing and stripping for Nadia via webcam to her home in the Czech Republic. 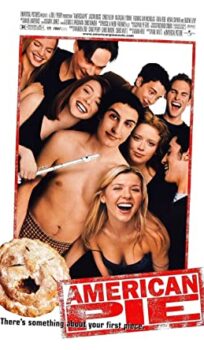