The movie is based on the life of Chris Kyle (Cooper), a Navy Seal sniper nicknamed The Legend. He was credited with over 160 kills over 1000 days and 4 deployments after 9/11. The movie focuses on his ability to balance his wife and 2 children, and his feelings of responsibility to save his brothers in arms.

Several of his friends are killed by an enemy sniper, and after he finally kills Mustafa, the notorious enemy sniper, he quits the military and returns to his family, but is unable to adapt to civilian life,  suffering from PTSD.

He finds therapy in helping wounded veterans by taking them to the shooting range.

He finally finds peace with his life and family, but is shot and killed by a Marine Veteran he is attempting to help. 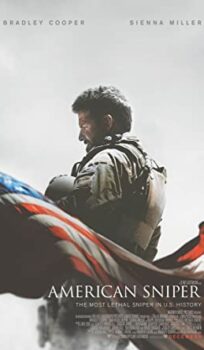