(aka American Pie: The Wedding)

Stifler (Seann William Scott) fixes the messes he made to Jim (Jason Biggs) and Michelle’s (Alyson Hannigan) wedding, showing for once that he cares about someone other than himself. Michelle’s sister Cadence (January Jones) chooses Stifler over Finch (Eddie Kaye Thomas) to have sex with because of this, and Finch decides that due to the fact that she likes Stifler as a person now, it isn’t really worth continuing to try to win her affections. Stifler and Cadence decide to meet up in a linen closet in the hotel where the wedding is being held, but Stifler accidentally has sex with Jim’s grandma in that closet. The two MILF guys (Justin Isfeld and John Cho) from the previous films put her in there because they got tired of looking after her, and Cadence was held up by her mother while on her way there. The smiles Jim’s grandma makes at Stifler during the wedding come off as she approves of Jim and Michelle’s union (she doesn’t because Michelle is not Jewish). Jim and Michelle become husband and wife, and they dance perfectly. Finch hooks up with Stifler’s mom (Jennifer Coolidge) once again in the end.

No Oz, Vicky, Nadia, Jessica (Natasha Lyonne), Sherman, or Heather in this film. 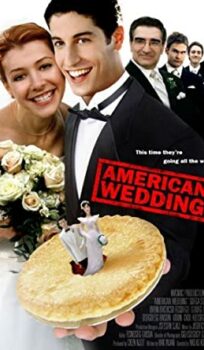