Submitted by Sam A

Note: Much of the proceedings take place off screen, sometimes being later described by a character or implied by Anne’s worsening condition.

The opening scene shows firemen breaking down the door of an apartment in Paris. After searching for several minutes they find the corpse of Anne (Emanuelle Riva) lying on a bed. The doors had been taped shut and she is adorned with cut flowers.

Anne is married to Georges (Jean-Louis Trintignant), who are both retired music teachers in their eighties. They attend the concert of one of Anne’s former students. When arriving home that night, Georges notices that the house been broken into. He notes that it couldn’t have been a professional job because the door was busted poorly. The next morning, they are eating breakfast together and Anne goes silent. She doesn’t respond to Georges as she sits in a catatonic state. Georges tries to get her attention by snapping and making noises. He then goes to the sink and wets a rag to put on Anne’s face (He leaves the tap on). When this does not work he goes to get dressed to take her to the hospital but he no longer hears water running from the sink. He returns to the kitchen and Anne is sitting as if nothing happened. He begins questioning her but she has no recollection of the events. Georges thinks she was playing a prank on him, but she rebuffs this by thinking that Georges is going mad. He says they should talk to a doctor but Anne refuses.

The next scene takes place several months later. Georges is talking to his daughter Eva (Isabelle Hupert) and telling her of her mother’s condition. Anne needs to undergo surgery on a blocked carotid artery.  The odds are good and only 5 percent fail. The next scene also takes place after a few months, showing that the surgery went wrong leaving her partially paralyzed and confined to a wheelchair. She makes Georges promise not to send her back to the hospital or go into a nursing home. He hesitantly promises. A special bed is installed in their bedroom. One day, Georges must attend a funeral for a former colleague and leaves Anne by herself. In his absence, she attempts to commit suicide by jumping from their window. Due to her slow and limited movement she fails and is found by Georges lying on the floor underneath the window. Not shown on screen, she suffers a further stroke and her condition worsens. Georges continues to look after Anne, despite the strain it puts on him to do so. Georges begins employing a nurse three days a week, to help care for Anne.

Georges employs a second nurse to help care for Anne. Everything seems fine at first, but the nurse neglects and mistreats Anne when Georges is not there. She brushes her hair annoyingly as Anne tries to resist. Georges fires her saying she is incompetent. She is angry because she gave up another job but Georges says he wishes for her to never be forced to do something when she can’t defend herself and tells her to leave. The nurse tells him to go fuck himself and leaves. Time passes and one day Georges is struggling to get Anne to drink. He finally forces the cup into her mouth but she spists the water out, angering Georges and causing him to slap her. Again, time passes, and one evening Georges sits next to Anne’s bedside after she has been crying out, apparently in pain. He tells her a story of his childhood, about how he went to the movies and cried at the melodrama, and as it reaches the conclusion, he grabs the pillow on the bed and smothers Anne.

Georges returns home with bundles of flowers in his hands, which he proceeds to wash and cut. He picks out a dress from Anne’s wardrobe and writes a long letter. He tapes the bedroom door shut and captures a pigeon which has flown in from the window. In the letter, Georges explains that he has released the pigeon. He goes to sleep. Georges hears Anne in the kitchen, she is washing dishes. Speechless, he gazes at Anne, as she cleans up and prepares to leave the house. Anne calls for Georges to bring a coat, and he complies, following her out the door. This is implied to mean that Georges had passed away in his sleep. The film concludes with their daughter, Eva seated in the living room, after she had wandered slowly around the now empty home. 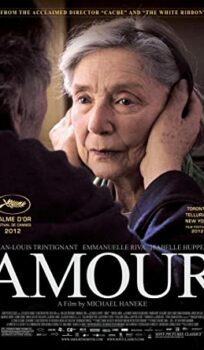