POOPER: (Thanks Curt)
He sees the painting and realizes why she missed the meeting.

LONG ENDING:
The film opens with a news report that famous playboy Nickie Ferrante (Cary Grant) is on a cruise from Europe to America. Once he arrives, he intends to marry his fabulously wealthy fiancee, Lois Clark (Neva Patterson). While on the ship, he strikes up a friendship with a beautiful young woman named Terry McKay (Deborah Kerr). She is engaged to a wealthy man named Ken Bradley (Richard Denning), who is waiting for her to return to New York from vacation. Terry has given up a career as a singer to prepare to be an educated housewife. There are immediate sparks between the two, but Terry rebuffs all of Nickie’s flirtations.

While at a stop at a European port before sailing to America, Terry agrees to visit Nickie’s grandmother Janou (Cathleen Nesbitt). There, Terry learns that Nickie is a talented painter and has a deeply caring personality underneath his suave persona. Simultaneously, Nickie is impressed with Terry’s kindheartedness and passion. Janou takes a particular liking to Terry, saying that Terry brings out the best in Nickie and promising to one day give her a beautiful Ferrante family shawl. Before they leave, Janou and Terry perform a song together that deeply moves Nickie. That night on the ship, Terry and Nickie share a kiss and no longer deny that they are in love. Nonetheless, Terry refuses to act any further on their emotions while en route.

As they approach New York, Terry and Nickie discuss that neither of them can support themselves apart from their respective fiancees. They agree that they will spend the next six months becoming self-sufficient. If they succeed and still have the same feelings for each other, they will meet at the top of the Empire State Building to get married at the end of six months. In the ensuing months, both amicably part ways with their respective fiancees and build careers (Nickie as a billboard sign painter and Terry resurrects her singing career). Terry also spends his free time practicing his painting so he can become a full-time artist. Their love for each other doesn’t diminish and both head to the Empire State Building on the appointed day. However, Terry is hit by a car en route and taken to the hospital. When she fails to meet Nickie, he believes that she’s rejected him.

We learn that the accident left Terry paralyzed from the waist down. She refuses to contact Nickie until she can walk again and be self-sufficient (which may never occur). In the meantime, she gets support from Ken (who is now her friend) and has a job as the conductor of a children’s choir. In his grief, Nickie flees back to Europe where he learns that Janou has passed away. His pain over losing the two most important women in his life translates into his work and Nickie’s artwork improves. His best painting is one of Terry and Janou. His agent is able to put together an art show for him in New York City, where Terry now lives.

Nickie returns to New York and attends a concert with Lois. While there, he bumps into Terry and Ken who are also in attendance. Though Ken pleads with Terry to tell Nickie what happens, she continues to hide her disability.

Nickie visits her the next day and gives Terry the family shawl. Although Nickie tries to discover why Terry broke their date at the Empire State Building and hasn’t contacted him since he is unable to get an explanation. As he is about to leave forever, he tells Terry about his best painting (the one of her and Janou) that he hoped would demonstrate his true love for her. Nickie recounts that when he realized she wouldn’t return to him, he had his agent give it to a woman in a wheelchair that stopped by his art show and fell in love with the painting. As he tells this story, Nickie realizes he’s never seen Terry stand up since his return. He runs to her bedroom where he finds the painting on Terry’s wall. Now realizing why she failed to meet him and that she is paralyzed, Nickie tearfully embraces Terry and says he still loves her. Terry finally abandons the charade and returns his affections. The film ends with Terry vowing that if Nickie can learn to paint, she can someday learn to walk again. 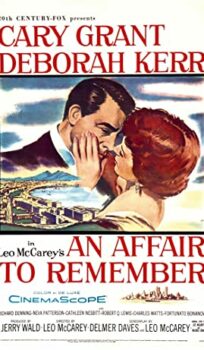