Pooper:
Fievel’s plan works and the evil gang of cats (minus Tiger) are driven out of New York City. Fievel’s family learns that Feivel is alive and reunite with him.

Long Ending:
Young mouse Fievel Mousekewitz (voiced by Phillip Glasser) lives with his parents Mama (Erica Yohn), Papa (Nehemiah Persoff), sister Tanya (Amy Green), and baby brother. The family of mice live in Russia, but dream of going to America where they believe there are no cats. The Mousekewitz family finally decides to emigrate after a bunch of cats (and their human masters) burn down the village where they live (in a nod to Russian pogroms). The Mousekewitz family boards a ship where they meet other mice from around the world searching for a better and cat-free life in America. Unfortunately, a storm hits the boat and Fievel is swept overboard. All but Tanya believe he is dead. But Fievel manages to climb into a bottle and eventually is carried by the tide to the shores of New York City.

Fievel is found by a bird named Henri (Christopher Plummer) who helps him get to the mainland and introduces him to a rat named Warren (John Finnegan), who promises to help Fievel find his family. Warren actually sells Fievel to a sweatshop. Fievel and a teenaged mouse named Tony escape the sweatshop and Fievel resumes his search for his family (and they keep narrowly missing each other). The pair also discover that there are, in fact, cats living in America.

Tony falls in love with an activist mouse named Bridget and, through her, they meet the mayor of the mouse town, a raging drunk named Honest John. He is currently being prodded by a wealthy socialite mouse named Gussie Mausheimer (Madeline Kahn) to come up with a plan to get rid of the cats once and for all. Fievel develops a plan and Honest John and Gussie recruit the rest of the mice to help put it in action (including the Mousekewitz family, who keep missing out on seeing Fievel).

One day, Fievel stumbles upon the cats’ secret lair. There, he discovers that Warren is actually a cat in disguise (using his connections to the mouse world to enrich himself and provide meals for his compatriots). The cats discover and imprison Fievel. While trapped in a cage, Fievel befriends a non-mouse-eating cat named Tiger (Dom DeLuise), who frees Fievel. The other cats discover Tiger’s betrayal and pursue Fievel to stop him from exposing Warren’s secret.

The cats follow Fievel to the docks, where Honest John and Gussie stand ready to enact the plan to drive the cats out for good. Fievel makes it to the pair and exposes Warren as a cat. The mice execute their plan to drive the cats out, which involves chasing after the cats with a gigantic mechanical mouse (Feivel devised the plan based on a folktale his Papa told him about a giant mouse that chased the cats out of a small Russian town). The mechanical mouse drives the cats onto a boat bound for China. In the aftermath, the Mousekewitz family finally cross paths with Gussie, Honest John, Bridget, Tony, and Tiger (who had defected from the cat gang), and learn that Fievel is alive. During the scrum, however, Fievel got separated from the mouse community and finally gives up on his search for his family.

His family and friends begin looking for him and, their search successful, the Mouskewitz family is reunited. The film ends with Fievel’s family and friends being flown on a sightseeing tour over the New York City by Henri and his compatriots. Henri promises that Fievel and his family will have many more adventures in the land of opportunity… now free from all cats (but Tiger). 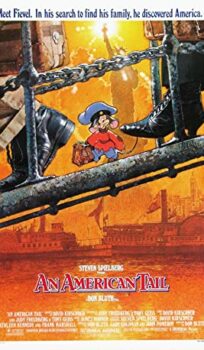