POOPER:
Paul Biegler (James Stewart) mounts a successful defense, and Lt. Manion (Ben Gazzara) is acquitted. The Manions then skip out on the bill.

Longer Version:
Fred Mannion (Ben Gazzara) is accused of murdering Barney Quill.  Paul Biegler (Jimmy Stewart) is his defense attorney.  Their strategy is to claim that Quill had assaulted Mannion’s wife, Laura (Lee Remick).  When Mannion saw his bruised and beaten wife, he lost control of his actions and went to the bar where he shot Quill.  However, there is some strong indication that Laura was willingly with Quill, and that Fred is the one who beat her when he found out about it.

Biegler finds a psychologist who testifies that Mannion was under an “irresistible impulse”, and could not tell right from wrong at that time. Mannion is found not guilty.  When Biegler goes to collect payment from Mannion, he finds that Mannion has left a note saying he was overcome by an “irresistible impulse” to leave town without paying Biegler. 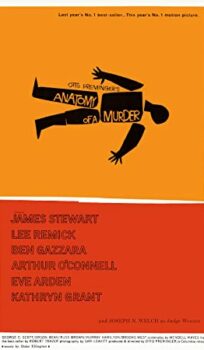