Clarence (Frank Sinatra) and Joe (Gene Kelly) are sailors on leave in LA, during WWII.  Joe, the ladies man (or wolf, as they call it), agrees to help the timid Clarence meet girls.  A little boy (Dean Stockwell) has run away to join the navy.  Joe and Clarence are coerced by the police to take the boy home.  Clarence meets the boy’s Aunt Susan (Kathryn Grayson) and falls for her.  Susan is a singer, desperate for a chance to audition for Hollywood composer/conductor Jose Iturbi (Jose Iturbi, playing himself).  To help Clarence win her over, Joe lies and claims they know Iturbi and have scheduled an audition.

Clarence and Joe try various ploys to meet Iturbi and arrange an audition, but fail.  Joe keeps trying to convince Susan how great Clarence is, but it is obvious Susan is interested in Joe.  Meanwhile Clarence spends all his time talking with a waitress, Brooklyn (Pamela Britton).

When Susan goes for the audition, and learns it was a lie, she starts crying.  Iturbi takes pity on her, and lets her sing.  Iturbi likes her singing, and hires her. Clarence tells Joe that he realizes Brooklyn is the girl for him, freeing Joe to go after Susan.  Clarence asks Brooklyn to marry him.  Out of nowhere, the entire US Navy band is there playing, conducted by Iturbi, as Susan & Joe, and Clarence & Brooklyn embrace. 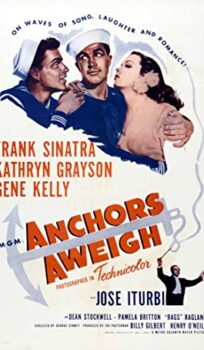