SHORT VERSION:
Harry ultimately gives Andre up to the Department of National Marine Fisheries, and Andre is placed in the Eastern Aquarium, located near Boston. He also steps down as the town’s harbormaster to take a research job with the Marine Mammal Protection Agency and nominates his fisherman friend Billy to succeed him.

Sometime in the spring, just before Harry and his daughter Toni leave their home to visit Andre, Toni tells Harry that maybe it would be best for Andre to mingle with his own kind out in the wild. With the cooperation of the aquarium’s owners, Andre is set free, and that summer, he makes a grand return to Rockport to spend the season with Harry, Toni, and the rest of their family.

The adult Toni – who is the film’s narrator – states that, every year, Andre would spend the winter at the Eastern Aquarium, be set free in the spring, and then would spend the summer in Rockport with her and her family, and he kept this pattern right up until his death at the age of 24.

LONG VERSION:
After finally getting woken up to the fact that he has been neglecting his duties as harbormaster, husband, and father in order to study and take care of Andre, Harry (Keith Carradine) decides to call Jack Adams (Duncan Fraser) of the Department of National Marine Fisheries to come get Andre the next day and put him in the Eastern Aquarium near Boston. He then gets a call from Griff (Jay Brazeau) and learns that Billy (Keith Szarabajka) has been calling the Marine Mammal Protection Agency and filing complaints about him and Andre, so he goes over to his house to have it out with him. Meanwhile, his daughter Paula (Aidan Pendleton) chats with Billy’s son Mark (Jonathan Jackson) about how Andre has become a problem for the local fisherman (but, in truth, for herself), and Mark says that he knows of a way to make Andre go away for good. They take Andre out in Mark’s motorboat, but Toni (Tina Majorino) sees them leaving the harbor and runs home and tells her mother Thalice (Chelsea Field) about it, so she leaves to get Harry and asks for Steve (Shane Meier) to watch Toni. When Steve is not looking, however, Toni sneaks out of the house and goes out in her dinghy to find Andre, despite a rainstorm approaching and a small craft warning having been issued.

Harry confronts Billy at his home over his complaints, and Billy angrily tells him how he can barely feed Mark and resents how Harry seems to have it all. He also tells Harry that, while he didn’t ask to be a celebrity like he did, he knows he would make a better harbormaster than him. Thalice then arrives and tells Harry about Paula and Mark and the small craft warning, so they and Billy head out to get them. Mark eventually stops his boat and produces a shotgun, believing that killing Andre is the only way to get rid of him, but as Paula attempts to get the gun out of his hands, it goes off and Andre disappears. They immediately return to the docks and find Harry, Thalice, and Billy arriving there, and Paula tells them that Andre is gone. As they go back to Harry’s car, Steve rushes up to them in a panic and says that Tori and her dinghy are missing. Harry, Billy, and Mark sail out to Rocky Point to find her, since Billy knows that the storm will likely send her there, and Thalice calls the Coast Guard.

At Rocky Point, Toni quickly finds herself in grave danger after she loses her oars and the violent waters start pushing her towards the rocks in the cove. Luckily, Andre appears and grabs the dinghy’s mooring rope and pulls her safely away. Andre then finds Harry and company and directs them to Toni. Her dinghy then capsizes, but Mark swims out to get her, and Harry gets them both on board. Upon returning to shore, Toni notices Andre getting caged up by Jack Adams to go to the Eastern Aquarium. She vehemently protests, but Harry explains to her that the aquarium is the best place for him, as he may not survive another winter in the wild, having gotten pretty beaten up the first time he did it. Toni accedes to the decision, but gives one of the aquarium workers instructions on how to properly look after Andre.

Some time later, Harry gets offered a research job at the Marine Mammal Protection Agency, and announces to the patrons at Ellwyn’s that he will be stepping down as harbormaster, and he nominates Billy to succeed him. Sometime in the spring, Harry and Toni decide to visit Andre, but before beginning their journey to Boston, Toni tells him that she feels that Andre ought to be with his own kind, instead of living in an aquarium. With the cooperation of the aquarium’s owners, Andre is released into the wild. During a few days in the summer season, numerous people along the Eastern seaboard phone up the Whitneys claiming to have seen Andre, with Lou (Douglas Newell) making the last call from nearby Friendship Bay telling them that he is indeed heading back to Rockport. Sure enough, Andre returns to the harbor, and the Whitneys, the other townsfolk, and news crews show up to welcome him back.

In the closing narrative, the adult Toni (Annette O’Toole) says that Andre spent his winters at the Eastern Aquarium and was set free every spring, and every summer, he’d swim 250 miles back home to spend the season with her and her family. By the time he was 24 years old, he could hardly see, but that didn’t stop him from completing his final trip. Toni remarks that, in all of the journeys in her life she has done or has yet to embark on, she knows she will never find a better friend than Andre.

As the credits roll, we see clips from the film interspersed with film footage of the real Andre. 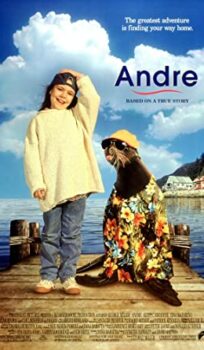