In New York in the 80’s, Prior is slowly dying from AIDS. Unable to cope with his illness, his boyfriend Louis leaves. His only companion is his best friend, drag queen, and nurse Belize. As Prior worsens, he is visited by an angel (Emma Thompson), who proclaims him to be a prophet.

Closeted McCarthyist lawyer Roy Cohn (Al Pacino) dies in the hospital of AIDS, haunted by the vengeful ghost of Ethel Rosenberg (Meryl Streep). His protégé, the equally closeted Joe (Patrick Wilson), is forced to admit his homosexuality when his mentally unbalanced wife Harper (Mary-Louise Parker) confronts him. Eventually she leaves him and he, struggling to reconcile his Mormonism with his sexuality, confesses to his mother Hannah (Meryl Streep), begins a relationship with Louis. Hannah moves to New York in an attempt to set things right, but ends up tending to Harper and befriending Prior instead.

Prior ultimately rejects the angel’s offer of bringing about a new age of stasis. Deciding to live with AIDS instead of escape, he convinces the angels to extend his life. Louis, wracked with guilt and angry over the discovery of Joe’s politics, returns to Prior who forgives him, but tells him they will never be a couple again. Harper, once separated from her husband, finds herself stronger than she had realized, and leaves to find a new life. 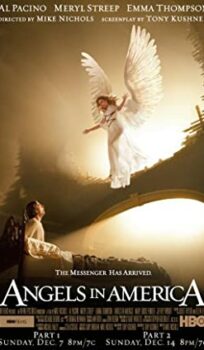