Rocky and Jerry are childhood friends and teen hoodlums. They are caught in a robbery. Jerry runs faster and escapes, but Rocky is sent to reform school.

Jerry visits Rocky before trial, and offers to turn himself in so Rocky will get a lighter sentence. Rocky, the leader of the two, tells Jerry not to.

Flash forward 20 years, and Rocky (James Cagney) is getting out of jail. He became a hardened criminal in reform school and has become a big time gangster.

He visits his lawyer Frazier (Humphrey Bogart) who is supposed to be holding his stash of cash for him. However, Frazier has gone to work for rival gangster Mac Keefer, and betrayed Rocky. Rocky looks up Jerry (Pat O’Brien) who has gone straight and become the priest in their old parish. Despite their stands on opposite sides of the law, they resume a friendship. Jerry has been trying to reach the local young thugs (the Bowery Boys) with no success. However, impressed that big time gangster Rocky is there, they begin to come around.

Frazier sends hitmen after Rocky. Rocky fools the hitmen into killing another of Frazier’s men, thnking it is Rocky. He then shows up at Frazier’s house. He steals Frazier’s record books listing all the politicians and police officials who Frazier and Mac Keefer are paying off.

Fr. Jerry launches a crusade to stop the mob in their city. He is succeeding. Frazier and Mac Keefer decide they have to kill Jerry. Rocky overhears and confronts them. Rocky ends up killing Frazier and Keefer. He is holed up in a building surrounded by police. Jerry goes in and brings him out.

Rocky ends up on death row. Jerry visits him in prison asking for one last favor. He explains to Rocky that the young thugs all admire Rocky and want to be like Rocky. To save them from a life of crime, Jerry asks Rocky to cry and plead for his life and “act yellow” so the kids will not want to be like him. Rocky says no, because all he has left his pride and his reputation after he is gone. However, when they reach the electric chair with the press watching, Rocky does beg and plead and “act yellow”.

Final scene is the young gang reading about this in the news and then going with Jerry to the church to pray for Rocky. 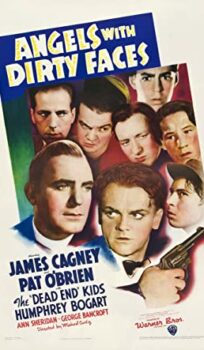