Short version:
A group of farmyard animals take over the farm from their alcoholic owner and try to run it themselves. Although sucessful at first, an opportunistic pig named Napoleon wrests control and runs the farm through fear, exploitation and violence. Eventually the other animals tire of this and once again decide to rise up against their oppresor.

Long version:
Manor Farm is a run-down old farm operated by Mr. Jones, an alcoholic who hates his animals. One night Old Major, one of the oldest animals on the farm, calls a meeting of all the animals and says that the day will come when they will overthrow Jones and take control of the farm for themselves, but warns that they must stay true to their themselves and each other after doing so under the mantra that all animals are equal. Old Major then leads the animals in a song of revolution, only to die during it.

The next moring Mr Jones sleeps off a hangover and forgets to feed the animals. Snowball, one of the pigs, leads an effort to break into the food storage shed so the animals can help themselves, only for Jones to appear cracking a whip. The animals decide to stand up to Jones, and drive him away from the farm. Jones returns with other farmers but the animals successfully fight them off, however some die including a dog who leaves her litter of puppies orphaned.

The animals rename the farm ‘Animal Farm’ and dispose of all the instruments Jones used against them, however another pig named Napoleon takes the puppies aside to raise them himself. Regular meetings are held to decide how the farm will be run and a series of laws is drawn up, the most important of which is ‘All Animals are Equal’. The animals then work hard to keep Animal Farm running during the harvest, and as a result food is plentiful and everyone is happy. A harsh winter hits, and Snowball unveils his latest idea to build a windmill to provide electricity. Napoleon, who has raised the puppies into loyal and vicious dogs, takes his chance to act and has his hounds chase Snowball from the farm and kill him. Napoleon claims that Snowball was planning to bring Jones back to the farm and announces that he will take control of Animal Farm, putting an end to the meetings as he will now ‘predict’ everyone else’s wishes.

Work on the windmill (which Napoleon has taken credit for) begins, supervised by the pigs and led by Boxer, a workhorse who works longer and harder than anyone else alongside his donkey friend Benjamin. The work continues through the spring, however Napoleon begins distorting the laws of Animal Farm to help himself. He also intends to trade the hens’ eggs for food for himself, and the hens are outraged (Old Major had promised the hens would be able to keep their eggs). In protest, they raid the food stores and pelt the pigs with eggs. In response, Napoleon sets his dogs upon the hens who are killed (as well as an innocent cat who just happened to be sleeping nearby). A show trial is held for the remaining hens as well as a sheep and a duck, who are labelled traitors and also murdered by the dogs. Napoleon also announced the revolution song will be forbidden under penalty of death.

As Animal Farm continues to make money, a group of jealous farmers decide to take care of the animals once and for all. Although the farmers are defeated several animals are killed, Jones destroys the nearly-completed windmill with explosives (killing himself in the process) and Boxer is badly injured. Building the windmill begins anew and continues throughout the winter despite the cold and snow, with Boxer (whose injury is untreated) and Benjamin working harder than ever. The pigs, meanwhile, do nothing but sleep and eat. Spring arrives, and one rainy night Boxer suffers another larger injury while working on the windmill and is rendered unable to work. Although the other animals expect Boxer to be allowed to retire, Napoleon has other plans. Benjamin realises the ‘ambulance’ sent to collect Boxer is really from a knacker and cries in agony during his futile effort to to rescue his best friend, but fails and can only watch as a screaming Boxer is taken away. Squealer later claims that Boxer died in hospital with his last words praising Napoleon, and while none of the animals believe him the snarling dogs ensure that nothing is done. That night, the pigs drink a toast to Boxer with the alcohol they were paid in exchange for the loyal horse.

Years pass. The pigs start walking upright and wearing clothes, the windmill is completed (although only the pigs are allowed to enjoy its benefits) and the ideals on which Animal Farm were founded have been long since forgotten. Life is now far worse for the animals than it ever was under Mr Jones, and the rules that once governed them have now been reduced to single one – ‘All Animals are Equal but some Animals are more Equal than Others’. One night, an elderly Benjamin watches as Napoleon plays host to a delegation of pigs where he announces that he plans to make the animals work harder and feed them less. As he does so, he realises that he can no longer tell the difference between Napoleon and Mr Jones. Benjamin tells the other animals about this, and they all unite as they once did against their shared oppressor and march on the farmhouse. Realising what’s happening, Napoleon tries to summon his dogs however they don’t respond as they’ve all gotten drunk, and can only watch as the animals led by Benjamin smash their way into the house. 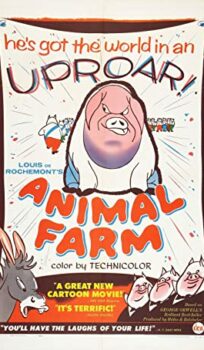