They join forces heading to the school and Nick’s friends are bitten while running through a Christmas tree warehouse. John also gets bitten and uses his last moments to carry Anna through the crowd so she can escape. They continue on to the school where headmaster Savage has gone crazy and released zombies into the school. Chris’s grandmother has died of a heart attack and Savage has tied up Anna’s dad on the talent show stage in front of a pit of zombies. Chris and Lisa get bitten trying to distract the zombies while Steph can steal her car keys back from the headmaster’s office. Anna dances and fights her way to the stage where she frees her father who fights with the headmaster. Eventually Anna uses a stage prop to knock the headmaster into a pit of zombies only to find out that her father was already bitten. He tells her he’s proud of her before sending her off with Nick. As they stand outside ready to fight the zombie horde, Steph pulls up in her car. The movie ends with them on the road trying to figure out where to go next. 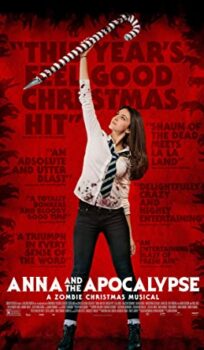