Pooper:
The three girls survive the night with nobody getting killed, and return Annabelle to her box. Lorraine communes with Daniela’s dead father and passes on a loving message from him to her.

Long Ending:
The movie opens shortly after the events of real-life paranormal investigators Lorraine (Vera Farmiga) and Ed Warren (Patrick Wilson) taking the Annabelle doll from the trio it was tormenting in The Conjuring film. They explain that the doll could not be possessed as spirits cannot possess things, only use them as a means to tether themselves to until they possess people. As the Warrens drive home, their car mysteriously breaks down outside a cemetery and the spirits there begin approaching the car en masse and almost kill Ed. Lorraine realizes that the doll acts as a beacon to any spirit in the area, particularly malevolent ones. When they get home, they bring Annabelle to their room full of cursed artifacts. With a priest’s help, they bless the doll and contain it in a cage made out of glass from a chapel.

Years later, Ed and Lorraine leave for the night. They hire babysitter Mary Ellen (Madison Iseman) to watch over their daughter, Judy (McKenna Grace). Judy is having a tough time as she is beginning to see spirits (just as her mother does) and her classmates shun or bully her as her parents have been publicly revealed as paranormal investigators. Notably, Judy sees the ghost of the Catholic Priest that founded her Catholic School wandering the school’s hallways.

After school, Mary Ellen’s best friend Daniela Rios (Katie Sarife) comes over to Judy’s house. It is obvious that she has an obsession with the Warrens’ connection to the supernatural. After convincing Mary Ellen and Judy to go out to play with a birthday present she bought Judy, Daniela manages to unlock the door to the room with the cursed objects. We learn that she is trying to communicate with her recently deceased father. Within the room, Daniela touches most of the objects and is manipulated into freeing the Annabelle doll from its enclosure.

Each girl begins witnessing minor paranormal activity, though they largely ignore it. When putting Judy to sleep, Mary Ellen explains that Daniela’s dad was killed in a car accident where Daniela was driving and, although the accident wasn’t Daniela’s fault, she blames herself. As night fully sets in, the paranormal events go into high gear as the spirits associated with the cursed artifacts begin to haunt the kids in earnest.

A boy named Bob (Michael Cimino), who lives across the street, comes over to ask Mary Ellen out. But he is attacked by a spectral werewolf (which eats one of the Warrens’ chickens). Mary Ellen is attacked by a spirit called the Ferryman. Daniela gets locked in the room with the cursed objects and is scared by numerous objects before being attacked by a specter posing as her dead father. And Annabelle herself attacks Judy, eventually communicating that the demon behind the doll wants Judy’s soul. Judy deduces that only by putting the doll back in its cage can they dispel the spirits.

Through the night, Daniela is possessed by a murderous bride and Bob just stops the werewolf from devouring Judy (by smashing it with his guitar before letting it chase him outside). Judy follows the ghost of her school’s priest to where Annabelle is hiding, followed close behind by Mary Ellen (who is attacked by haunted samurai armor). The possessed Daniela attacks them, but Judy manages to stop her by playing a recording of Ed performing an exorcism (which frees Daniela from the ghost’s grip). Mary Ellen essentially descends to the underworld to confront the Ferryman and his dead souls, and manages to recover the Annabelle doll and throw it to Judy.

Judy runs to the room with the cursed items but just before she can place the doll back in its enclosure, a demon with a ram’s head attacks. Daniela and Mary Ellen show up and, with their combined efforts, force Annabelle back in her cage. The evil spirits immediately disburse (with Bob finally making his way into the house just too late to help anyone, though they appreciate his effort). Judy’s parents return home and the girls explain what happened.

The film jumps ahead to Judy’s actual birthday, and it seems nobody is coming. Daniela, Mary Ellen, and her now-boyfriend Bob then show up, followed by most of Judy’s classmates (including Daniela’s younger brother, who apologizes for bullying Judy). Judy is thrilled that she is still accepted by her peers and friends with Mary Ellen and Daniela. As Ed entertains the guests, Lorraine takes Daniela aside. Lorraine tells Daniela that she was able to commune with her dad’s spirit, and that Daniela’s dad loves her and doesn’t blame her, thus giving Daniela the peace she sought. 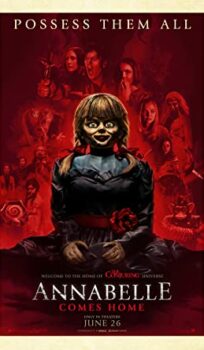