Miss Hannigan has the other half of Annie’s locket because the girl’s real parents perished in a fire. She gives it to her crooked brother Rooster and his girlfriend Lily, and with that and a forged birth certificate convince both Annie and Oliver Warbucks that they are her parents to collect on the reward Warbucks has offered.

The villains take Annie and her dog Sandy away, but soon afterward her fellow orphans, who overheard the plan and escaped the orphanage, arrive at the Warbucks mansion with the also-escaped Sandy and reveal the truth. Warbucks mobilizes all of N.Y.C.’s authorities and his private helicopter to search for her. Annie tricks the villains into letting her out of their truck for a minute, and flees, pursued by Rooster, who intends to kill her – even when Miss Hannigan tries to stop him. He chases her up a railroad bridge and soon she’s dangling from its top; she’s rescued by Warbucks’ servant Punjab by way of the helicopter.

Rooster and Lily are arrested, and all the other characters (including Miss Hannigan) celebrate Annie being reunited with her “Daddy” Warbucks and his secretary Grace, giving her the family she wanted at last. 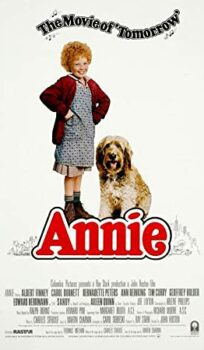