Pooper:
Only Lena and her husband have returned from the Shimmer. As they embrace, both are shown to have glowing eyes, so they both are clones south alien DNA.

Longer Pooper:
We first see a meteorite hit a lighthouse. Lena (Natalie Portman) is biologist, professor at Johns Hopkins. Her husband never returned from his secret Army mission a year ago. Her husband Kane (Oscar Isaac) suddenly appears in their house with no memory of how he got there. He starts to get sick. Military comes and grabs both of them, Lena wakes up in a base in Area X by The Shimmer, an area surrounding the lighthouse in a national park, so its been kept secret. Kane was on a mission there, he is thet only one who had ever returned from there. Lena volunteers to go on an all female mission. 5 women go in, they find a mutated alligator, two get killed by a mutated bear, one walks off sprouting leaves, Dr. Ventress (Jennifer Jason Leigh) reaches the lighthouse and disintegrates into sparks, Lena is left to find a video recorded by her husband, who killed himself with a grenade, then a duplicate Kane showed up in the video. A duplicate Lena shows up, they fight, Lena destroys duplicate with grenade, and light house catches fire. As it burns the alien landscape burns too, and the Shimmer disappears. Kane got better as soon as the Shimmer disappeared. After her debriefing, Lena hugs her husband and they both have glowing yellow shimmer in their eyes, indicating both are duplicates with alien DNA. 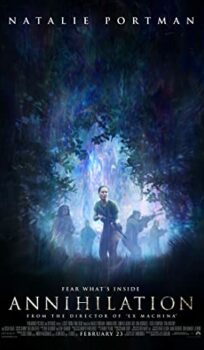