While Chris (Richard Dreyfuss) and Gina (Rosie O’Donnell) are having the O’Haras – Brian (Dennis Farina) and Pam (Marcia Strassman) – over at “their” house for dinner, Bill (Emilio Estevez) goes over to the O’Haras’ house to plant a bug. However, just after doing so, he is suddenly knocked out by Luella (Cathy Moriarty), who has been hiding in the house ever since she escaped the earlier attempt on her life in Las Vegas by Costanzo’s hitman Tony (Miguel Ferrer). Thinking that Bill is another hitman working for Costanzo, she drags him down to the basement, ties him up, tapes his mouth shut, and puts a bag over his head before taking his gun and heading back upstairs.

After Chris notices that Bill is taking too long with completing his task, he sneaks out of the house and heads over to the O’Haras’ place to look for him. After taking a brief look around and getting no response from Bill after calling his name a few times, he decides to head back to the dinner party before his absence becomes too suspicious. Soon after returning, he gets a call from Maria (Madeleine Stowe), whom he is estranged because he continuously refused to marry her (citing his family’s history of divorces – including his own – as the reason), and she informs him that she is heading to Veracruz in a few days because she has been offered a job there. He tells her that he now wants to marry her and will do anything he has to do to make it happen, but she refuses to talk about this with him over the phone and hangs up on him.

Brian and Pam leave soon after, having been put off by the awkward behavior that Chris and Gina have been exhibiting all evening and having drawn some incorrect conclusions about them. After they go, Chris decides to get his gun and badge and go over to the O’Haras’ house to both find Bill and admit his, Bill’s, and Gina’s true identities to the couple. When Brian and Pam get home, Luella shows them that she has Bill in the basement (though they don’t know that it is Bill because he is still wearing the bag on his head). They tell Luella they need to call the police, but she refuses to do that because she feels they will take her back to Las Vegas to testify against Costanzo if she contacts them. She tells Brian and Pam that she has no choice but to leave, and when Brian asks what she plans to do about Bill, Luella replies that she is going to kill him. She justifies this decision by explaining to them that Bill came here to kill her, and if he lives, he will tell Costanzo’s mob that they helped her and cause the mob to start coming after them. Brian and Pam help her put Bill in the trunk of their car, but Chris and Gina spot them as they are doing this, and after Luella takes off, they follow in their own car.

Chris and Gina lose track of Luella when she makes a sharp left turn in the direction of a salmon company by a bay that they fail to see, and Luella walks Bill down to the edge of one of the company’s piers, intending to shoot him in the back of the head and let his corpse fall into the water. Bill hits her before she can kill him and dives into the drink, and as Luella keeps trying to shoot him without success, Chris and Gina suddenly drive onto the pier, having figured out where she went. Luella turns her gun on them, but her shots miss, and they drive straight at her, leaving her no choice but to jump into the water to avoid them. The duo stops the car, and Chris tells Gina to dive in and help Bill while he goes after Luella. Gina gets Bill completely free of his bindings, and Chris disarms Luella before knocking her out with a punch to the face, but the protagonists lose their vehicle in the water when the section of the pier that it is parked on collapses from the weight. Off-screen, Chris, Bill, and Gina get Luella back on dry land and use her car to take her to the local hospital so she can get treated for a broken nose that she sustained when Chris punched her, and the Seattle police force is notified about her location.

The next day, Hassrick (John Rubinstein) – the lawyer attempting to prosecute Costanzo, who is actually on his payroll – calls Costanzo from the airport in Las Vegas and tells him that he received word from the Seattle P.D. that Luella is staying with the O’Haras on Bainbridge Island, and he is about to catch a plane to Seattle so he can meet with her and bring her back. Costanzo tells Hassrick that he needs to know exactly where she is right now because he is determined to see that she doesn’t testify, but Hassrick replies that he will call him when he gets there. After Hassrick hangs up, Costanzo calls Tony and tells him that they have work to do. Later on, Hassrick gets to the hospital and meets with Luella, Gina, and Seattle detectives Wills (Blu Mankuma) and Gilliam (Thomas Mitchell); and Hassrick tells Luella that he is happy to see that she is alright and tries to assure her that every precaution has been taken to bring her home safely. However, she replies that if she decides to go back to testify, she must see Brian and Pam first because they have no idea what happened to her last night. Hassrick and Gina decide to allow this, and Gina adds that she will stay with her until she is on the plane. Around the same time, Tony makes his arrival on the island and heads for the O’Haras’ house.

Chris and Bill return to “their” house to pack up their belongings and equipment and see that Gina’s pet Rottweiler, Archie, is barking up a storm inside, but when they open the door to his room, he immediately runs out of the house in order to chase after a neighbor’s cat that is walking around nearby, and they decide just to let him go after it. Shortly afterward, as Chris is complaining to Bill about how unhappy he is over his belief that he has lost Maria for good, Bill spots Gina, Luella, Hassrick, Wills, and Gilliam arriving at the O’Haras’ place. However, they then spot Tony appearing in another car and parking in a secluded spot nearby, and after they see him take a sniper rifle out of the trunk, they run over to the O’Haras’ house to warn everyone about him. However, as they approach the property yelling for everyone to get down, Luella sees them and yells to Brian, Pam, Wills, and Gilliam that those guys tried to kill her earlier, so Wills and Gilliam go outside and start shooting at them. After Gina finds out from Luella who Wills and Gilliam are shooting at, she informs the detectives that they are shooting at other cops, so Wills orders Gilliam to go inside and call for backup. After Gina steps outside and yells to Chris and Bill that she told the detectives here that they are policemen as well, Tony non-fatally snipes Gilliam, then creeps his way into the house and non-fatally shoots Wills. Gina ushers Luella upstairs while Brian and Pam take shelter in the basement, and Hassrick soon encounters Tony. After he informs Tony where Luella went, Tony shoots and kills him, presumably having been ordered to do so by Costanzo because he had had enough of him.

After getting upstairs and going out onto the back balcony, Gina tells Luella to jump over the balcony’s half-wall down to the floor below, then run down to the water and stay by the shore. Just as Tony is about to catch up to them, Gina hides behind one of the half-walls, and after Luella jumps down, Gina surprises Tony and knocks his rifle over the balcony to the ground, though she gets backhanded across the face by him for her interference. Luella injures her left leg when she lands, and though Tony fires a bullet from his handgun at her, she manages to crawl out of the way just in time. Tony then takes Gina hostage and brings her back inside, and when he finds himself confronted by Chris and Bill, he manages to keep them at bay by threatening to kill her before escaping down to the next level of the house with her. The duo head outside through a different exit and find Tony taking Gina alongside the swimming pool with his back to Luella, who is trying to limp away from him. Tony tries to make a deal with Chris and Bill, offering to let Gina go if he can just kill Luella and then walk out of here, but the guys reply that they aren’t making any deals with him. Suddenly, Archie appears and leaps to Gina’s defense, tackling both her and Tony and sending them into the pool. When Tony surfaces, he tries to shoot Luella, but Gina springs up in front of her and takes the bullet in her right shoulder. Chris and Bill then gun Tony down.

The cops and paramedics are called in, and Chris and Bill say farewell to Gina before she gets loaded into an ambulance, with Luella riding along with her. Bill drives Chris back to his apartment upon their return to Seattle, and when Chris goes inside, he gets on the phone and calls Maria’s mother’s house since Maria is staying with her. However, the call suddenly gets disconnected, and when he reaches for the base of the phone to call again, it slowly moves away from him by the cord. He looks up and sees that Maria has returned and had pulled the cord out of the jack, and he asks her to marry him, and she says “yes.” They then kiss while Bill happily watches from his truck through his binoculars, having known that Maria had come back. 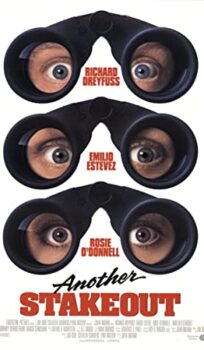