Hank Pym (Michael Douglas) decides to retire and hide the Pym Particle formula from everyone, even SHIELD, because is too dangerous.

Years later his former protege, Darren Cross (Corey Stoll) figures out how to minimize inanimate objects, but can’t minimize living tissue.  He continues working on it until he finally develops a way to minimize organic tissue and creates a weaponized version of the suit called Yellowjacket

Pym recrutes Scott Lang (Paul Rudd) to steal the Yellowjacket prototype as the new Ant-Man with the help of his daughter Hope (Evangeline Lilly) who is working for Cross.

To break into Cross Tech labs they need an old piece of equipment from SHIELD that happens to be on the new Avengers base, which results in Ant-Man having to get through Falcon to get it in a very amusing fight in which Ant-Man keeps saying he’s sorry to Falcon as he beats him up.

Cross figures out the plan and traps them during the attempted robbery to kill all 3 of them but they manage to escape.  Cross dons the Yellowjacket suit and fights Ant-Man in the gettaway helicopter, later landing on a suburban neighborhood.  The police shows up and arrests Ant-Man since Yellowjacket is in miniature form crashed in a bug zapper an they don’t see him.

In the police car Scott hears a distress call from the address of his former wife and daughter and the police drives to it to reveal that Yellowjacket has kidnapped Scott’s daughter.  Ant-Man fights Yellowjacket again and finally has to shrink to subatomic size to penetrate his suit and desintegrates Yellowjacket onto itself.  He then gets lost in the quantum sized molecules until he figures out a way to go back to regular size.

Post-Credits Scene 1
Pym shows his daughter hope the prototype Wasp suit he and his wife were working on for her.

Post-Credits Scene 2
Falcon and Captain America finally find the Winter Soldier but are obviously in a dangerous situation (possible Civil War scene) and Falcon asks Cap if they can call Stark for help and he says that’s not an option.  Then Falcon says… I know a guy. 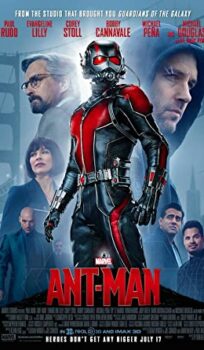