A young couple making love, don’t notice their young son has gotten out of his crib, walked to an open window, and falls to his death. During the aftermath of this tragedy, the therapist husband (Willem Dafoe) attempts to treat his wife’s grief, traveling to their cabin in the woods.

The wife (Charlotte Gainsbourg ), on the verge of insanity from her grief, has a violent altercation with her husband, knocking him unconscious, then proceeds to smash his genitals with a piece of firewood, drills a hole in his leg, attaches a stone wheel to his leg, and throws away the wrench so he can’t remove it.

She then cuts her own clitoris off with scissors.

The husband awakens, attempts to release himself from the stone and hide from his wife.

Eventually, he removes the stone wheel, strangles his wife, crawls into the woods and eats berries. 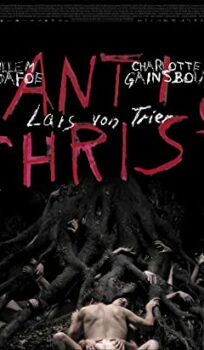