Pooper:
Thomas burns the goddess, kills Quinn, and helps Andrea and Jennifer escape the island. As Malcolm watches, Thomas succumbs to his various wounds and is transformed by the island into its new god.

Long Ending:
A cult living on a remote Welsh island kidnaps a rich woman named Jennifer and holds her for ransome. Jennifer’s father convinces his son Thomas (Dan Stevens), who has recently returned to the UK despite having been declared dead due to events that occurred on a religious mission to China he had been in, to journey to the island and rescue his sister.

When he arrives, Thomas learns that the island is run by three ex-convicts – Malcolm (Michael Sheen), Quinn (Mark Lewis Jones), and Frank (Paul Higgins). The three had been marooned on the island when their prison transport was sunk during a storm. They claim to have communed with a goddess, who has blessed the island with crops and prosperity. They worship the goddess with each of the community members drawing blood to “feed” to her. Thomas soon befriends Frank’s son Jeremy (Bill Milner) after he keeps Jeremy’s romantic relationship with Quinn’s daughter Fionn (Kristine Froseth) a secret. He also grows close with Malcom’s compassionate daughter, Andrea, who is also the community’s doctor (Lucy Boynton). Thomas also sees visions of the goddess throughout the island.

As Thomas and Andrea bond, Andrea learns about Thomas’ past. He was sent on a missionary trip to China. While there, the Chinese rebel against the group and slaughter all of Thomas’ compatriots in front of him (which is why everyone thought he was dead). Instead of killing him, they brand Thomas with a metal cross. Since then, Thomas has lost his faith in everything but his sister. Meanwhile, while searching the rooms of the new arrivals, the founders deduce that Thomas is the person sent to pay the ransom for Jennifer.

Andrea also confides in Thomas that the island is actually toxic. The Goddess has powers to rejuvenate the crops and keep the animals alive. The founders have forcibly bound the Goddess in a home outside the community. The Goddess is watched over by a demonic figure called the Grinder. The founders forcibly feed blood to the goddess to force her to keep the island thriving. Her powers, however, are growing weaker with each passing day and the crops and livestock continue to wilt due to the toxicity of the island.

Eventually, Thomas devises a plan to rescue Jennifer and escape along with Jeremy and Ffion on a boat they’ve been building. Before the plan can be enacted, Quinn learns that Ffion is pregnant. Disgusted that she would sleep with Jeremy (who is slightly mentally disabled), Quinn kills his daughter. Jeremy walks in soon after the murder and fights with Quinn. He loses the battle and flees to Andrea and Thomas for help. Quinn turns the islanders against the trio, seizes leadership from Malcolm, and has Jeremy ritually murdered (falsely accusing Jeremy of killing Ffion). Quinn demands that Malcolm kill Thomas to prove his commitment to the cult. Before Thomas can be killed, Frank arrives and causes a disturbance when he sees his son’s corpse. Frank runs off to kill the Goddess (and doom the community), allowing Thomas to escape in the commotion. Quinn also tries to kill Malcolm during the disarray (but only succeeds in knocking him out).

Thomas follows Frank to the Goddess and sneaks into the house where she is captured. The Grinder kills Frank as Thomas releases Jennifer. The siblings try to sneak out, but are captured by the Grinder and Quinn. It is revealed that Quinn is responsible for chaining up the Goddess and developing the idea to force feed her the blood of the community members. He leaves with Jennifer as his prisoner and gives permission to the Grinder to kill and feed Thomas to the Goddess. Although his hand is ground into meat, Thomas manages to escape and kill the Grinder. The Goddess pleads with Thomas to kill her and release her from her torment. Having rediscovered his faith through meeting an actual god, Thomas obliges and sets her on fire. This causes the island itself to begin erupting into flame.

As the community members flee for the boats, Quinn captures Andrea and puts her in a jail cell with Jennifer. He reveals his plan to rape and impregnate the two women and then use the “pure” blood of their children to feed the Goddess (not knowing the Goddess is dead). Thomas arrives and the three attack and kill Quinn… but not before he mortally wounds Thomas. The trio head to the boats, but Thomas collapses before they can make it. He tearfully says good bye to his sister and Andrea, who continue to the docks and leave the island. Malcolm, having recovered from his fight with Quinn, arrives on the hill where Thomas lies bleeding to death. Malcolm sees as the grass around Thomas springs back to life when it comes into contact with his blood. As Malcolm smiles, the plants merge with Thomas, turning him into the new god of the island. 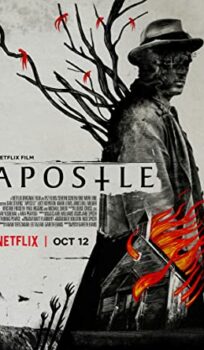