Pooper:
Tim and Dr. Carlo are killed and IRIS is seemingly destroyed. As Anna and her fully-recovered brother board a plane to a vacation, it appears that IRIS may still exist.

Long Ending:
This is the first-ever “second screen” film. iPhone and Android users can download a free app on their phone that listens to the film and plays  additional content on your phone that supplements the actions occurring in the movie. For example, your phone will show text messages between the characters, POV shots from the on-screen phones, alternate shots of certain scenes and other fun stuff.

Anna (Hannah Hoekstra) is a college student whose brother Stijn is trying to recover from a motorcycle accident that has left him partially paralyzed from the waist down. Though rehab is slowly working Anna and Stijn agree to allow Dr. Carlo to implant a new electronic device on his spine that is designed to electronically stimulate his legs, allowing him to immediately walk again.

That night, Anna goes to a party with her roommate Sophie. Anna is surprised to learn that the party is being hosted by an ex-boyfriend she lost touch with named Tim. The two catch up and Tim notes that he is a failed computer programmer. Anna drinks way too much and wakes up with no memory of the night before. She notices a new app on her phone named IRIS. The app appears harmless, simply functioning as a type of voice-controlled search engine. The app activates in one of Anna’s classes and causes a disruption, resulting in her professor confiscating the phone for a period of time.

Soon, the app begins acting malevolently. It emails out a video Anna took of Sophie cheating on her boyfriend with one of the school’s professors. It also covertly records Anna in the shower and later remotely broadcasts the video in a television store. When she asks a computer expert to help her delete IRIS, it disappears every time the expert tries to find it. Anna also discovers that IRIS can remotely access any electronics that it comes into close contact with. This is evidenced when IRIS publicly airs a video of the professor that confiscated her phone having sex with a male student (leading the professor to commit suicide). When Anna attempts to destroy the phone, it shows her a video of her brother and causes the implanted electronic device to malfunction, triggering Stijn to suffer a near-fatal heart attack. Anna also gets phone calls from a ghostly female voice.

Anna sells her phone and buys a new one. The store is quickly destroyed by an unexplained explosion and IRIS, having somehow migrated to Anna’s new phone, claims responsibility. Anna visits Tim to request that he help her delete the app, but IRIS again threatens to harm Stijn. Anna then asks Dr. Carlo to remove the implant from her brother, but the doctor claims that Stijn is too weak to undergo such surgery. On the second-screen function, we see texts between Dr. Carlo and Tim hinting that they know more than they are letting on and that both have a connection to IRIS.

IRIS grows more bloodthirsty, orchestrating the deaths of both Sophie and Sophie’s boyfriend. Anna finally figures out that IRIS appeared on her phone at Tim’s party. She confronts Tim and soon realizes that he controls IRIS from his own phone. She steals Tim’s phone and runs to the hospital to try and disconnect her brother from the implant. Tim follows and he and Dr. Carlo chase after Anna while IRIS also makes a few unsuccessful attempts to kill or maim her.

Eventually, Anna is cornered on the roof. Tim explains he developed IRIS initially to spy on another ex-girlfriend. His ex was knocked up and had an abortion. The stress caused her to commit suicide. Tim then re-purposed IRIS to control implants like the one implanted into Stijn. He and Dr. Carlo intend to make millions from this new technology. Tim tricks Anna into activating a function on his phone that causes the phone to taser her. Anna drops Tim’s phone and the phone begins to reboot.

Dr. Carlo yells that they have gone too far and IRIS is clearly a failure. Tim kills Dr. Carlo in response, claiming he can fix IRIS. He is about to kill Anna too (to prevent her from spilling his secrets) when his rebooted phone calls him. Tim answers and hears his dead ex-girlfriend (the same voice that earlier called Anna) on the other line who has somehow possessed IRIS. The phone then explodes in Tim’s face, killing him and seemingly disabling IRIS forever.

The film jumps ahead to Anna and Stijn boarding a plane for a vacation. Stijn appears to have fully recovered. As the flight is about to take off, IRIS’ digital face flashes onto the airplane’s electronic control panel, indicating the app survived the destruction of Tim’s phone and is not yet done with Anna. Meanwhile, IRIS indicates that it has taken control of the viewer’s phone as well. 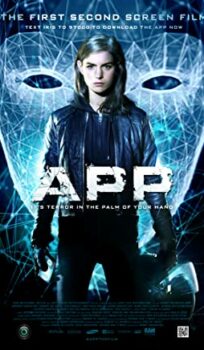