Pooper:
Arthur (AKA Aquaman) finds the lost trident, rescues his mother, harnesses the powers of the ocean, and defeats his brother Orm. As Aquaman takes on the role of king of all underwater kingdoms, his parents finally reunite.

Long Ending:
Many years ago, Atlanna (Nicole Kidman), a princess of Atlantis, escapes from an arranged marriage and washes up on the shores of a lighthouse. She is found by a lighthouse keeper named Tom (Temuera Morrison) and the pair soon fall in love and have a son – Arthur. Atlanna is pursued by Atlantean forces and eventually agrees to return to her home so long as her family is left unharmed. Upon her return, she is forced into marriage and bears another child – Orm. As Arthur grows, he exhibits great powers, including super strength and durability, the ability to telepathically talk to sea creatures, and to breathe under and manipulate water. Atlanna’s aide Vulko (Willem Dafoe) is entrusted by Atlanna to train and protect Arthur. Eventually Vulko tells Arthur that, as punishment for her relationship with Tom and giving birth to “half-breed” Arthur, Atlanna was sent to her death in a region populated by sea monsters known as the Trench.

In the modern day (post events of Justice League), Arthur is known as the hero Aquaman (Jason Momoa). He patrols the ocean, rescuing surface dwellers in trouble. On one occasion, he comes across a group of pirates under the leadership of Black Manta (Yahya Abdul-Mateen II). Aquaman rescues the crew, but refuses to save Black Manta’s father from drowning, causing Black Manta to swear revenge. Meanwhile, Orm (Patrick Wilson) is the king of Atlantis. He wishes to declare war on the surface world, but needs the rulers of three other undersea kingdoms to authorize such a war. He uses Black Manta to manipulate king of the largest kingdom, Nereus (Dolph Lundgren), to join him (although it’s later revealed Nereus realized Orm’s trickery but wanted an excuse to go to war anyways).

Nereus’ daughter/Orm’s arranged betrothed Mera (Amber Heard) attempts to convince Aquaman to return to Atlantis, find the legendary trident of their first Atlantean king that has the power to unite the ocean kingdoms, and challenge Orm for the throne. After the Atlanteans try to kill Tom, Aquaman agrees. Vulko gives them a clue to where the trident might be found, but Arthur is captured by Orm while in Atlantis. The two face off in battle for the throne, and Orm overwhelms Aquaman. Mera intervenes and the pair barely escape with their lives. Orm hires Black Manta to kill Aquaman and gives him Atlantean technology and soldiers to aid him. Orm also has tidal waves deposit the ocean’s trash back onto the land and kills the king of a third kingdom (made up of fish-like creatures) to force them to authorize his war. Finally, Orm arrests Vulko as a traitor to Atlantis.

Aquaman and Mera travel the globe in search of the trident. They solve riddles, survive a trek through the Sahara desert, and defeat Black Manta and his forces. Their pursuit eventually forces them to journey to the Trench where they are attacked by a horde of monsters. The pair manage to escape through a portal to a place lost in time (where dinosaurs still live). There, they find Atlanna alive, having also fled the monsters of the Trench by going through the portal. They have a happy reunion and Atlanna tells them the mystical trident is located in this world and can open the return portal home, but is guarded by a giant sea creature. Arthur goes to retrieve the trident and though overwhelmed by the sea creature, manages to talk to it and convince it of his worthiness. Arthur manages to take the trident and gain new levels of power.

Aquaman opens the portal home and intervenes in Orm’s attack on the fourth kingdom (made of crustacean people) whose permission he needs to wage war on the surface. Aquaman now controls the monsters of the Trench (including the giant monster who guarded the trident), kisses Mera, and manages to repel Orm’s attack. Mera rescues vulko from his imprisonment. Eventually, the brothers square off and this time, Aquaman prevails. Orm demands that Arthur kill him, but Atlanna arrives and gets Orm to realize the error of his ways and to submit to being taken into custody. Arthur promises to visit his brother in prison. The denizens of all four kingdoms proclaim that Aquaman is their king, and he and Mera embrace. The film ends with Atlanna reuniting with Tom and Aquaman narrating that while his parents came from different worlds and were never meant to meet, their love ultimately saved the world.

In a post-credit scene, Black Manta is rescued by Dr. Stephen Shin (Randall Park) after having been tossed into the ocean during his battle with Aquaman. He promises to help Dr. Shin find Atlantis, so long as Dr. Shin helps him find Aquaman. 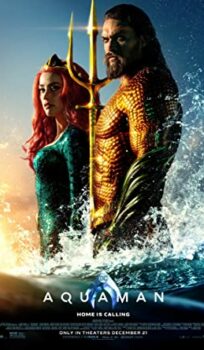