Pooper :
The spider made a gigantic web in Ross Jennings’ (Jeff Daniels’ barn, but the egg sack for the new super-deadly breed is actually in his cellar. After Dr. Atherton (Julian Sands) is killed, Jennings tries to get his family out of the house and destroy it, but he falls through the old floor and into the basement. He confronts the queen spider, and after setting it on fire with molotov cocktails, nail guns it through the air and into its eggs, which pop and burn in the blaze.

Long Ending:
Photographer Jerry Manly arrives in the jungles of Venezuela to photograph the exploits of spider-scientist/small-game hunter Dr. James Atherton (Julian Sands). Dr. Atherton and his crew journey into new territory, where they end up encountering and capturing some fairly large and aggressive spiders (they are also hard to kill, surviving Dr. Atherton’s initial attempts to asphyxiate them). They return to the camp where Dr. Atherton discovers these spiders have no sex organs and are similar to “worker” or “soldier” ants. He determines they are a new species. Unbeknownst to the crew, the very large Queen Spider has hidden in their equipment. It bites and kills Manly as he sleeps. Dr. Atherton and crew do not see the spider bite andpackage up Manly’s body in a coffin and mail it back to his hometown in the US. The Queen Spider has hidden herself in his coffin.

When the coffin arrives home, the Queen Spider makes its way into the old barn on the property of Dr. Ross Jennings (Jeff Daniels). Dr. Jennings has severe arachnophobia, and when he and his wife find a big web in the barn, he refuses to venture back in. The Queen spider mates with a local spider and before you know it, there is a host of new, deadly spiders crawling through the town.

The spiders end up killing two townspeople. Although Jennings wants an autopsy of the bodies, the other town doctor – Dr. Sam Metcalf – refuses to consent and blames the deaths on other causes. Unfortunately for Metcalf, he is the next victim by spider bite and with him out of the way, Jennings is able to get the autopsy he wants. Jennings and the medical examiner find bite marks on the bodies of the three corpses, but are unaware of any insect or arachnid who could cause death from a single bite. Jennings calls Dr. Atherton for advice (as he is a renowned spider expert. Though Atherton is dismissive at first, when he learns that Manly’s body was sent to the town, he sends an assistant to investigate.

Eventually, the assistant and Jennings manage to capture one of the spider offspring. Another one is identified and killed by local exterminator Delbert McClintock (John Goodman). The assistant dissects the spider and discovers it has three venom glands, which is how it kills its victims so quickly. He also determines it is linked to the new species of Venezuelan spider. After hearing this, Dr. Atherton comes to the town to investigate personally. He deduces that these spiders have a short lifespan, but that the next egg sac will likely contain more queen spiders rather than worker spiders. He also says that it is likely one of the spiders is a “general” of the spider colony, whose job it is to protect the queen and the egg sac. He says that if the next egg sac containing the new queens hatches, there will be no stopping the spiders.

Atherton, Jennings, McClintock and several others begin to search for the Queen’s web. Though most of the group start in the mortuary where Manly’s body was delivered, Atherton sees a picture of the web in Jennings’ barn and realizes the spiders are there. He goes to the barn alone and, believing he can handle the spiders, enters to try and capture the Queen. The spiders are smarter and bigger than he expects, and the General manages to leap onto Atherton’s neck and bite him – paralyzing him while the soldier spiders swarm and kill him. We then discover that the Queen and General have relocated the main web and egg sac to Jennings’ basement.

Eventually, the group determines the spiders are based out of Jennings’ property. They arrive and manage to get Jennings’ family out of the house, which is being swarmed by soldier spiders. Jennings hesitates at first, but finally overcomes his arachnophobia to help in the rescue. Unfortunately, he is the only one unable to get out of the house. Worse yet, he falls through his house’s rotting floor and into the basement where the main web is located.

While down there, he is confronted by the General spider, and manages to electrocute it. He tries to light the egg sac on fire, but before he can, he is attacked by the very large Queen. A struggle ensues, and though he is injured, he manages to light the queen on fire. Jennings sees the eggs beginning to hatch, just as the Queen makes a last-ditch leap at Jennings to try and bite him. He grabs a nail gun and fatally shoots the queen in mid-air. The force of the nail propels the Queen (still on fire) into her egg-sac, igniting the entire thing and killing all the newly-hatched Queens.

We then jump ahead to find Jennings and his family having moved to a big city. He and his wife are toasting their escape from the country and remarking how much safer the big city is. As they speak, a tremor shakes their apartment building, and the two run to check on their kids and cross their fingers that this isn’t a full-blown earthquake (proving that there is nowhere that is truly ever “safe”). 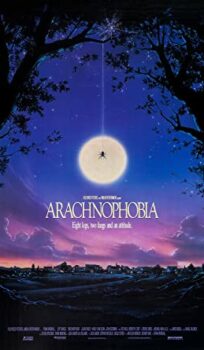