As their heist plan goes awry after trigger happy Baines (Laurence Fishburne) shoots a homeless man, he and the remaining members Cochrone (Matt Dillon), Quinn (Jean Reno) Palmer (Amaury Nolasco), Dobbs (Skeet Ulrich) and Hackett (Columbus Short) scramble to escape with the money.  This is further complicated with Hackett decides to stop the plan and the unexpected arrival of a police officer Jake Eckehart (Milo Ventimiliga).

Dobbs grows a conscience and attempts to help Eckehart and Hackett but is caught and Palmer stabs him to death. Palmer commits suicide when the guilt of killing his best friend and the information that police are on the way to arrest them all becomes too much to handle.  Quinn and Baines are killed by a makeshift bomb created by Hackett, and Cochrone dies in a chase with Hackett.

At the hospital, Eckehart tells a variation of the events that unfolded that clear Hackett of wrongdoing (since he saved his life). The head of the security firm Duncan Ashcroft (Fred Ward) mentions there might possibly be a reward for Hackett stopping the heist from being successful, implying Hackett will be able to save his home for himself and his brother Jimmy. 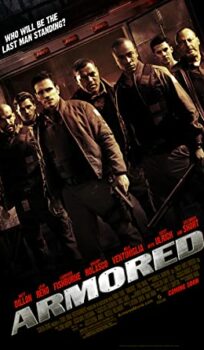