SHORT VERSION:
Twelve alien pods land around the world, and a team of scientists are called to communicate with the aliens and see what their purpose is for arriving.

Dr. Louise Banks (Amy Adams) discovers that by learning the language of the aliens, one can see future events. This means that all the scenes featuring Louise’s daughter Hannah were not flashbacks, but visions that she saw once she communicated with the aliens. The aliens are bringing their language to humanity because the aliens will need humanity’s help in 3000 years time.

Louise manages to avoid a military attack against the aliens after telling General Shang the dying words of his wife to prove her theory after she had seen their later encounter in a vision. The aliens leave Earth, and Louise decides to pursue a relationship with one of her co-workers, Ian Donnelly (Jeremy Renner), since they will become parents to Hannah, even though things will not end well for any of them.

LONG VERSION:
The film opens with a montage of Louise Banks (Amy Adams) giving birth to and raising her daughter Hannah. The montage ends with her daughter dying prematurely as a teenager from an incurable disease. Louise then narrates that she used to think time had definitive beginnings and endings, but now she is not so sure.

On the news, twelve alien spaceships appear throughout the globe. One of them hovers over Montana. Though the arrival causes global pani, the world governments show restraint. Louise is a renowned linguistics expert. She is recruited by Col. Weber (Forest Whitaker) to come to the site and attempt to communicate with the aliens residing within the spaceship. When she arrives, she is paired with a scientist named Ian Donnelly (Jeremy Renner). The pair are ordered by Col. Weber to determine the aliens’ purpose for coming to Earth.

Initially, the 12 countries where the aliens have landed work with each other and share information. Although progress is slow, Louise steadily increases communications with the aliens, slowly deciphering their written language. She and Ian eventually deduce through the written language that the aliens speak in a non-linear manner, i.e., one symbol conveys an entire sentence and thought. Throughout her dealings, Louise continues to have visions of Hannah, and these visions help her devise methods by which she can communicate with the aliens.

Public mistrust of the aliens increases, especially as so little is known about them. General Shang (Tzi Ma), the leader of the Chinese delegation, takes a particularly aggressive approach. Ultimately, General Shang believes that the aliens are here to sow discord and orders the ships to depart. This forces Louise and Ian to ask why the aliens have journeyed to Earth before they want to. The response they get from the aliens is that the aliens wish to “offer a weapon” to them. The aliens then transmit hundreds of symbols to Louise and Ian. After a rogue military officer attempts to attack the aliens, the alien ships cut off communication and move into the higher atmosphere. The world governments panic at these developments and cut off communication with each other. General Shang announces he will be launching an imminent attack on the aliens and the US government prepares to do the same.

Louise and Ian realize that the symbols transmitted to them have gaps that can only be filled in by combining them with the symbols transmitted by the aliens to the other countries. Although Louise and Col. Weber convince the US government to try and reach out to the other countries, it is impossible to reestablish communications before General Shang’s attack. War seems inevitable. Ian does deduce, however, that the language appears to be instructions relating to the concept of time.

Louise runs outside and calls to the alien ship, which sends down a transport vessel to get her. She communicates directly with the aliens, asking them to clarify the message. The aliens clarify that by “weapon,” they meant “tool.” The aliens explain they have come to deliver this tool to the Earthlings because in thousands of years, they will need the Earthlings help with a crisis the aliens will experience. When Louise asks how the aliens can know of the future, the alien explains that like their language, they can view time in a non-linear fashion (i.e., allowing people to see the past, present, and future simultaneously). The language imparted to all the countries, when read together, would teach humans how to perceive time in the same way. Louise bemoans the fact that the nations will destroy the aliens and then each other if the aliens do not convey this to the world. But the aliens respond that it is up to Louise to convey their message and prove the aliens’ purpose. Louise asks how she can possibly accomplish this, and the aliens respond that through their interactions, she has already developed the ability to view time non-linearly. It is at this moment the viewer realizes that the visions of Hannah that Louise has been experiencing were not memories of the past, but were actually visions of the future.

Louise returns to the ground and steals a satellite phone. Using her new abilities of perception, she views the future where she is being awarded at a UN conference for her work with the aliens. There, she meets General Shang, who thanks her for stopping his attack on the aliens before it started. When Louise asks him how she did it, he says she called him on his private phone line and proved the aliens’ intent by telling him the last words his wife spoke to him before she passed. Thanks to experiencing this future event, Louise is able to call General Shang in the present, deliver his wife’s message (which was anti-war), and get him to call off the attack. China reestablishes contact with the US and all other nations, who similarly disarm and share the symbols they have received from the aliens. Having accomplished their mission, the alien ships depart.

Having saved the day in the present and understanding that the visions of Hannah were of the future, Louise again looks forward. She sees that she gets married to Ian and that their love leads to Hannah’s birth (as well as Louise spreading the alien’s language throughout the world). But she also sees that she and Ian divorce and that there is no way to save her daughter from an untimely death. Louise narrates to her daughter Hannah that despite knowing the pain that will eventually befall them both, she would never change a thing as it would cause them to miss out on the many moments of joy and love they will share over the course of Hannah’s lifetime. 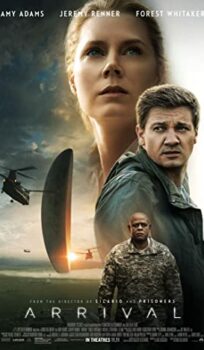