Mortimer Brewster (Cary Grant) discovers that his maiden aunts Abby and Martha (Josephine Hull, Jean Adair) have poisoned 11 elderly gentleman callers, and that his brother Theodore “Roosevelt” Brewster has buried their bodies (along with a 12th, who died of natural causes) in the “Panama Canal” he’s digging in the cellar. As Mortimer tries to come up with a plan to have Theodore committed to the Happy Valley Asylum and take the blame for the killings, his other brother, the criminally insane Jonathan (Raymond Massey) arrives with a  corpse of his own. Eventually, all of the noise that Theodore makes as he “charges San Juan Hill” attracts the attention of the police, who recognize and arrest Jonathan. Jonathan, Abby, Martha and Theodore all try to tell the police about the 13 bodies in the cellar, but because all of them are in the process of being taken to various mental institutions, the police ignore them. As Mortimer (who by this time fears for his own sanity) signs the commitment papers, Abby and Martha reveal the family’s dark secret-Mortimer is not truly a Brewster after all. Their widowed brother married the family cook when she found herself pregnant with another man’s child. 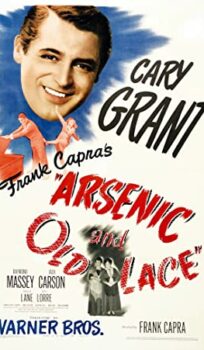