Holly (Lara McDonnell) and Mulch (Josh Gad) end up helping Artemis Fowl (Ferdia Shaw) and they find the Aculos where Artemis’s father (Collin Farrell) had it hidden in the house. The time freeze collapses and the fairies have to leave.

Artemis realizes he cannot hand the Aculos over to Koboi. Instead, Holly uses the Aculus to rescue his father just as Koboi is about to kill him. His father then gives Holly a list of accomplices in the fairy world who are working with Koboi, a list Holly’s father gave him before he was killed.

Holly returns the Aculos to the fairies and Root (Judi Dench) assigns her the job of investigating the accomplices.

Back in the holding facility where Mulch is being held by human law enforcement and has been telling the whole story, Mulch reveals that this was all a set up to prove the existence of magic to the authorities. He uses his dwarf abilities to escape and is met by Artemis, Artemis’s father, and Holly. Together, the group all flies off together. 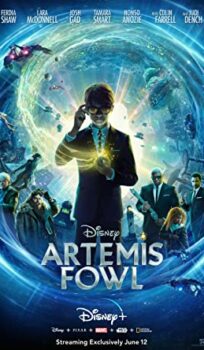