Although he goes to Baltimore with Carol (Helen Hunt) and Melvin (Jack Nicholson) , Simon (Greg Kinnear) doesn’t meet up with his parents and receives no money from them.  His loses his apartment and Melvin accepts him as a roommate until he can get back on his feet.

Carol helps Simon through his depression and his inner artist is awakened when he sees her in the bathtub and begins to draw and sketch her.  When they get back to New York, Helen calls Melvin and with Simon’s encouragement, Melvin goes to her house to talk.  They take a walk at 4:00 a.m. and they kiss.  As the neighborhood bakery opens, he holds the door open for Carol and inadvertently stands on the cracked cobblestone sidewalk, which his Obsessive Compulsive Disorder kept him from doing throughout the entire film. 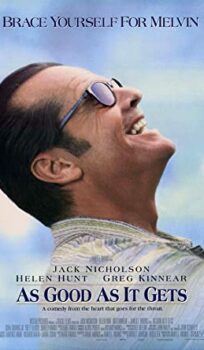