SHORT VERSION:
After experiencing virtually nothing but bad times since arriving in Aspen, Dexter tells T.J. one day that he is going back to Detroit, but he wants to win the upcoming Powder Eight ski competition with him before he goes. Unfortunately, when they practice the next day on an off-limits area of the mountain, Dexter gets killed in a sudden avalanche. T.J. leaves Bryce a few days later due to her lack of compassion and sympathy over his loss, plus she has no desire to see their relationship go long-term, anyway.

T.J. soon gets approached by a new instructor, Todd, who wishes to partner up with him for the Powder Eight, but T.J. refuses, still grieving over Dexter. To gain some closure, he writes a story about his and Dexter’s friendship titled “Aspen Extreme” and submits it to Powder Magazine. Some days later, he pleasantly discovers that the magazine printed his story, his first real accomplishment as a writer. Invigorated by this, he goes up to Todd and asks him to be his partner for the competition, and Todd happily accepts.

T.J. and Todd win the Powder Eight, defeating the reigning champions (and T.J.’s enemies) Franz and Rudy. Afterwards, T.J. has a chat with Robin, the woman he is truly meant to be with, and he apologizes for any wrongs he did by her before telling her that he plans to remain in Aspen, both to keep pursuing a writing career and because he loves her. They then kiss and walk away together.

LONG VERSION:
At the start of T.J.’s (Paul Gross) and Dexter’s (Peter Berg) second skiing season in Aspen, Dexter’s first private lesson goes horribly wrong, resulting in the ski school’s director, Karl (Trevor Eve), slapping him with a two-week suspension. That night, he reconnects with Tina (Nicolette Scorsese) – a girl he met at a party Bryce (Finola Hughes) held months earlier – at a bar, and after telling her that he needs money, she introduces him to Jake (Roger Wilson), a drug dealer. Dexter eventually agrees to deliver a bag of drugs to a client, Steve (Jean Robert Barbette), at another bar the next day. However, while waiting for Steve, Dexter becomes increasingly nervous and paranoid over carrying the drugs and the thought of being caught over it, and when a cop comes in just to get a drink, he panics and flushes the drugs down a toilet. When he steps outside to cool off, Steve arrives, and he tells him that they have a problem.

Over the course of the same few days, T.J.’s relationship with Robin (Teri Polo) continues to strengthen, with him even sending her a story that he wrote about her. However, Bryce returns to town, and she sees T.J. with Robin and becomes jealous. She calls him one night to try to reignite their old flame, but he tells her that things are different now and then hangs up. The next day, she forces him to hang out with her by hiring him for an all-day private skiing lesson, and afterward, she invites him back to her place for a drink and a chance to chat some more. They wind up having sex, which T.J. quickly regrets, and when he later gets back to the caboose home he shares with Dexter, he finds that Robin has already been there when he sees the story about her pinned to the door along with a note saying that she waited until 3:00 a.m. for him to show up. The next day, he visits Robin at her house to try to explain himself, but she knows that he and Bryce were canoodling and then some and thus calls off their relationship.

As T.J. is driving back home, he spots Dexter running down the road naked, battered, and bloodied. After getting him back to their place, Dexter explains that Jake’s friends did this to him, and they have ordered him to come up with $10,000 to cover the lost drugs or else he will be killed. Seeing no other alternatives, T.J. visits Bryce and asks her to loan him the money to save his friend, and she agrees to do it on the condition that he becomes her live-in companion. T.J. accepts the deal, and he gets the money to Jake and then prepares for the move into Bryce’s house. Dexter feels like he is being abandoned and the two get into a brief fight, and T.J. tells him that he is tired of picking up after him, then leaves in their van with his stuff. Dexter subsequently descends into both alcohol and cocaine addiction, and though T.J. lives comfortably with Bryce, he feels hollow without Dexter and Robin in his life.

One morning, Robin decides to intervene in Dexter’s self-destructive lifestyle by first barging into his home and disposing of his intoxicants, then forcing him to get cleaned up and go jogging and skiing with her, and she tells him that she hates how his and T.J.’s friendship has gone south. Later, Dexter visits T.J. and tells him that he is moving back to Detroit, but before he goes, he wants to win the Powder Eight competition with him like they originally planned, and T.J. agrees to be his partner again. Unfortunately, as the duo practice on an off-limits section of the mountain the following afternoon, they get caught up in a sudden avalanche, and Dexter loses his life. A couple of days later, Robin visits T.J. at the caboose while he is boxing up Dexter’s belongings in order to send them to his mother, and she offers her condolences and tries to assure him that Dexter’s death was not his fault after he blames himself for bringing Dexter here. As T.J. is drowning his sorrows at Bryce’s house some nights later, Bryce exhibits no compassion or sympathy over his loss, and that, combined with Bryce admitting that she has no desire to see their relationship go long-term, spurs him to leave her life for good.

A day or two later, T.J. is approached by a new instructor, Todd (William McNamara), and Todd asks him if he wants to partner up with him for the Powder Eight, citing how he was once an Olympic hopeful and that people say that T.J. is the best skier on the mountain. T.J. refuses, still grieving over Dexter. Eventually, to gain some closure, he writes a story about his and Dexter’s friendship titled “Aspen Extreme”, and he submits it to Powder Magazine, a major skiing magazine. Some days later, he discovers that the magazine published his story (which Robin herself reads and is visibly moved by), his first real accomplishment as a writer. Invigorated by this, T.J. approaches Todd and asks him to be his partner for the Powder Eight, and Todd happily accepts.

At the competition, reigning champions (and T.J.’s enemies) Franz (Martin Kemp) and Rudy (Stewart Finley McLennan) get three perfect tens, but when T.J. and Todd take their turn, they ski off into a rough out-of-bounds section and perform a flawless routine before returning to the course to cross the finish line. The judges give them three perfect tens as well, but Karl – who is serving as one of the judges – gives them an additional perfect ten, considering their run better, giving the duo the championship. After receiving the trophy, T.J. makes eye contact with Robin in the crowd, and he soon gets to talking with her. He apologizes for any wrongs he did by her and says that he is staying in Aspen, both to further his writing career and because he loves her. They then kiss and walk away together. 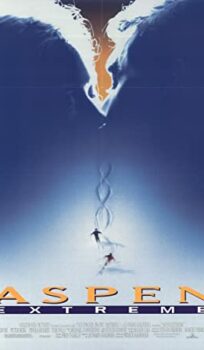